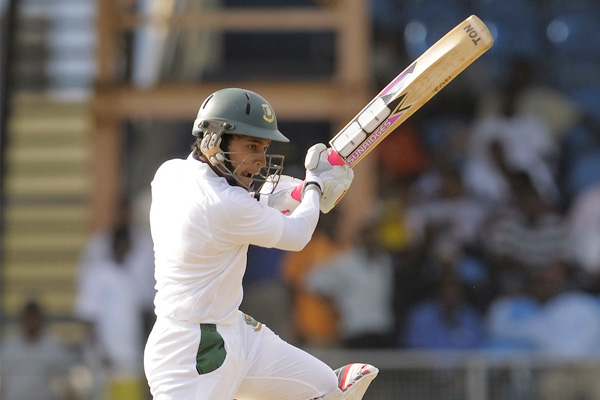 Sports Page — West Indies took less than two hours to end Bangladesh’s promise of a prolonged fifth day by bowling them out for 314 before their openers knocked off the required 13 runs in 2.4 overs. There was enough time for Mushfiqur Rahim to reach his third Test century but support was non-existent at the other end, as Bangladesh lost five wickets for the addition of 58 runs.

Kemar Roach was the morning’s most effective bowler, picking up two wickets to finish with a four-wicket haul. Shannon Gabriel was rewarded for his strong work on the fourth day with two cheap wickets while Sulieman Benn, who didn’t have to bowl an over on the fifth morning, finished the match on seven wickets.

Mushfiqur reached his century with a straight six off Roach with his side seven wickets down. He was dropped twice during the 90 minutes of play – on 71 by Chris Gayle at slip and by Jerome Taylor on 115. Gayle had dropped Mushfiqur on 10 yesterday, as had Darren Bravo when he was 25. But of the four drops, Taylor’s was the simplest chance, the ball looping straight to him The day began well for the visitors. Taylor’s juicy full-toss was put away by Nasir Hossain and the batsman found the boundary again three overs later with a controlled pull off Roach. It looked as if he too was finding some form, just as the out-of-form Mahmudullah had with his 66.

In Roach’s next over, however, Nasir stopped short of pulling the ball and his half-hearted shot popped a simple chance to Gabriel, who ran in from mid-on to complete the catch near the non-striker’s end. It ended the 42-run sixth-wicket stand between Mushfiqur and Nasir, which had taken Bangladesh through a difficult period late on the fourth day. But when it ended, so did Bangladesh’s hope for a fight.

Mushfiqur continued to bat positively, hitting Taylor for three boundaries in an over. He cut one past point, drove one on the up through the covers and then played a leg-glance to enter the nineties.

But the other end wasn’t giving him any support. Shuvagata Hom was late on a Roach in-dipper and given out lbw. He reviewed the decision but it was always going to hit the stumps. Taijul Islam and Rubel Hossain were swiftly removed with decent pace aimed at the stumps, and the spate of wickets threatened to inflict an innings defeat on Bangladesh, before Taylor’s drop averted that result.