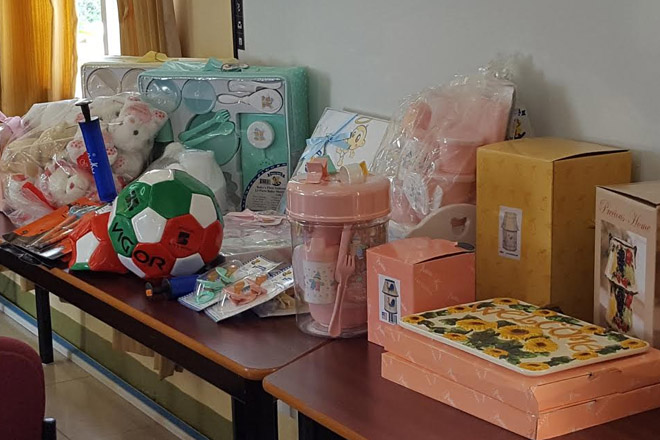 ROC (Taiwan), through SimplyHelp, donates childhood items to the Ministry of Education

(SKNIS): The Republic of China (Taiwan) has once again lent its helping hand, through the charitable organization SimplyHelp, to donate a number of items to the Ministry of Education that will benefit children in need.

The items were symbolically handed over to the Ministry of Education, who will in turn distribute them to charitable organizations including churches.

“My government is pleased once more to partner with Taiwan and SimplyHelp,” said Deputy Prime Minister and Minister of Education, Honourable Shawn Richards, adding that this is the second time the organisation has donated one container full of goods for the citizens of St. Kitts and Nevis.

“We are thankful for the pencils, balls, toys, and giftsets for babies, blankets, items of clothing for children and many other things,” said the minister. “Children are always happy to receive toys and gifts. They will bring smiles to the faces of some of our children.”

The minister said that the foundation will live up to its motto “Changing Lives One Heart at a Time.”

He said that the value of the donated supplies will be seen not in its monetary value, not by the many smiles on the faces that they will bring to the children but by the way the items are used by the recipients.

“I would like to encourage all of the recipients of these gifts, from Taiwan and SimplyHelp, to ensure that the items reach those who really need them and that they are put to good use,” said the minister. “I am certain that the pencils and balls will be useful for our children within our primary schools. The blankets, toys and baby supplies can be used for the Early Childhood Centres and nurseries, our hospitals but also as donations to some of the needy and most vulnerable amongst us.”

The minister of education added that some of the items will be useful for the effective Early Childhood Outreach Simulation (ECOS) programme, which is a culturally responsive, community based, early intervention programme that caters to the holistic development of the children who are poor and vulnerable.

Minister Richards further stated that he is “committed to efforts which seek to achieve quality education, not only by using the traditional methods for academic performance, but also by using non-traditional methods, tools and supplies to ensure that toddlers are developed.”

The minister said that SimplyHelp and even more so the Government and people of Taiwan are “our friends and indeed our good partners.”

“This kind of partnership is a wonderful example that our partner countries, international organisations and the private sector can work together to help to minimise the effects of poverty by building capacity through early interventions,” said the Deputy Prime Minister.

SimplyHelp is a non-profit organization based in Los Angeles dedicated to relieving poverty by providing emergency disaster relief, vocational training, and shelter and care for homeless elderly. It is active in 23 countries with a strong presence in Central America and South East Asia since 2000. SimplyHelp was formed in 2000 by founder and president, Tina Bow.