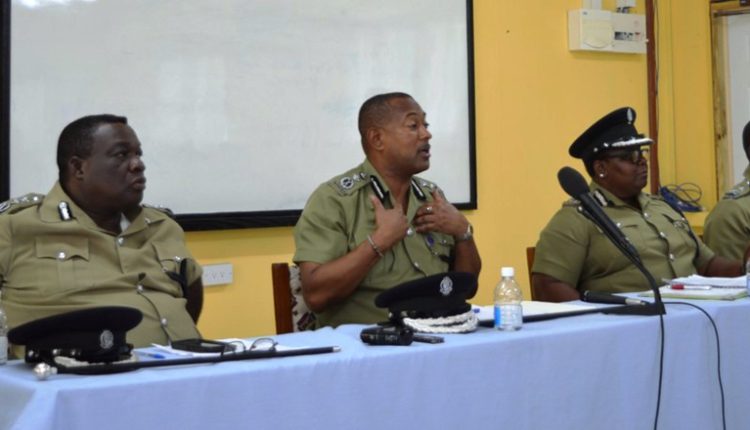 (SKNIS): Upgrades in communication and information sharing practices among police officers and police stations are expected to improve efficiency in the Royal St. Christopher and Nevis Police Force (RSCNPF). Commissioner of Police, Ian Queeley, gave examples of the areas in which new technology would assist at a recent press conference.

Radio communication has been significantly enhanced with the rollout of the Digital Radio System which is a product of Motorola.

“An officer in Tabernacle can now speak to an officer in Gingerland, Nevis, with this new system in place. We now [also] have a push-button communication system with our officers…wherever they are,” Commissioner Queeley said.

He added that another improvement was in the area of the RSCNPF’s Wide Area Network (WAN), which provides land, air and sea support. He said, “a recent test of that system by the Regional Security System (RSS) recorded receipt of signals in Antigua and Barbuda, Anguilla, St. Maarten and Tortola.”

An upgrade to the telephone private branch exchange (PBX) System has also led to better communication between the police and partner agencies. According to Commissioner Queeley, the system provides features such as call forwarding and teleconferencing. He explained that it connects all police stations and departments, as well as sister agencies, such as the St. Kitts-Nevis Defence Force (SKNDF) and its Coast Guard Unit, the Fire and Rescue Services and Her Majesty’s Prison.

The computers for their technical operations, commonly called (TOPS), have been acquired and are being moved into position, he informed.

“The crime management software (CMS) is ready for deployment pending the training of officers, which will commence in September of this year. The CMS should be fully commissioned by October of this year,” he said.

“The second phase of TOPS will include the ability to generate detailed reports on incidents, crime and custody records and the ability to see dashboard designs, view summary dashboard, and to print all forms. This system also provides for an officer to access information in a most timely manner, and gone will be the days where we will have to wait on the paper report. Once the officer enters the information into the crime management software, it will be ready for viewing and printing,” Commissioner Queeley said.