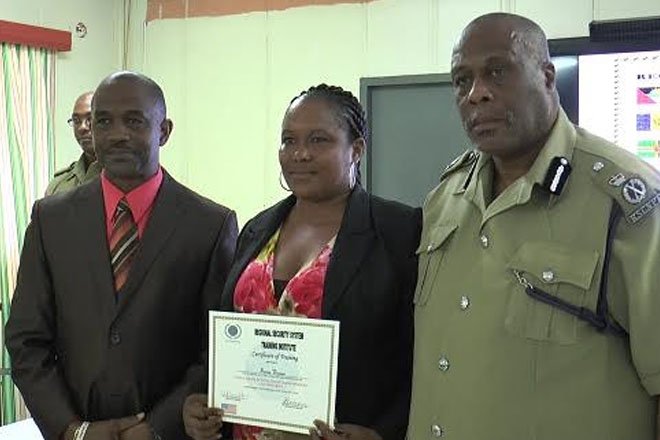 (ZIZ News) — 25 constables, one special constable and one sergeant of the Royal St. Christopher and Nevis Police Force, who participated in the Regional Security System Training Institute Crime Scene First Responders Course, were recognised, on Friday, at the course’s completion ceremony.

Permanent Secretary in the Ministry of National Security, Osmond Petty explained the initial intent of the course and stated his expectations that each participant will have a newfound appreciation for his or her job.

“My information is that this course has been designed to provide police officers with information pertinent to their responsibilities as first responder to the criminal offense crime scene. I expect therefore, that a major goal of this training course would have been to instill a new appreciation and understanding of the valuable role every police or every patrol officer plays in the criminal investigative process,” he said.

Acting Commissioner of Police Stafford Liburd expressed hope that the participants will now practice what was learned.

“I look forward for each one of you returning to your respective departments with new energy, with zest and zeal and to deliver the quality of service that the public in the Federation of St. Kitts and Nevis so demand from us,” he said.

The Crime Scene First Responders Course was funded by the International Narcotics and Law Enforcement Affairs of the U.S. Embassy in Bridgetown and coordinated by Regional Security System Headquarters.