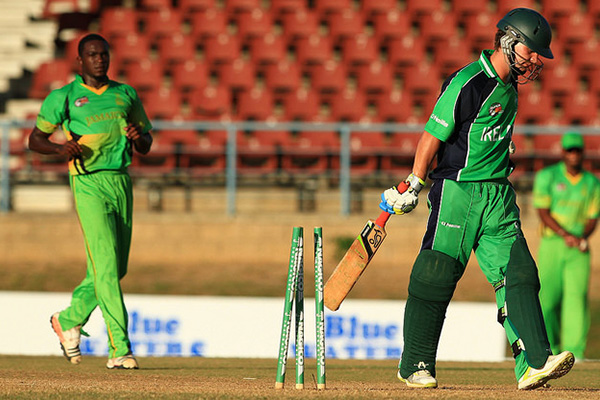 Taylor, who last played for Jamaica against Trinidad in March 2011, grabbed three wickets to help destroy the Irish and send them crashing to their second straight loss after their 114 runs defeat to Guyana.

Opener John Campbell top scored with a powerful half century to steer Jamaica to the winning target after comeback pacer Taylor and medium pacer Andre Russell ripped through the Ireland line-up, dismissing them for 161 in 46.1 overs.

Campbell struck a well played 71 and batted through most of the innings hitting six fours and two sixes to carry his side to within eight runs of the target before he was bowled.

He pulled Jamaica out of a slump at 52 for the loss of two wickets, sharing a century stand for the third wicket with Tamar Lambert who chipped in with 27.

Earlier, a half century stand from the openers, William Porterfield and Niall O’Brian, set the Irish off to a promising start against the Jamaicans  who beat  champions Windward Islands  by 14 runs in  the tournament opener on Thursday.

O’Brian top scored with 35 while Porterfield scored 25 in a 54 run partnership which was broken by Captain Dave Bernard who had Porterfield caught behind.

Alex Cusack scored 30, adding 24 runs for the second with O’Brian who top scored with 35 and fell when he was trapped lbw to Tamar Lambert, signaling the start of a steady fall of wickets.

Russell, who was named man-of-the- match, finished with best figures of three for 19 including the scalp of Cusack and was not out on 12 after facing six balls and hitting two sixes.

Taylor, who did not play in Jamaica’s opening game against Windwards and who last represented the West Indies in June 2010 against South Africa, picked up three wickets for 33 runs while Lambert bagged two for 27.