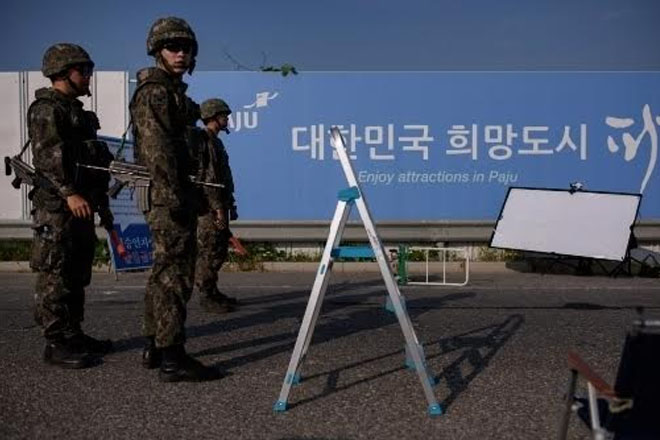 A defense ministry spokesman said 70 per cent of the North’s total submarine fleet — or around 50 vessels — had left their bases and disappeared from Seoul’s military radar.

The movement of such a large number of submarines was “unprecedented,” the spokesman said, adding that Seoul and Washington were beefing up their military surveillance in response.

“The number is nearly 10 times the normal level… we take the situation very seriously,” he said.

The North has also doubled the number of artillery units along the heavily-fortified land border with the South, he added.

The move came as top officials from both Koreas resumed a talks aimed at easing military tensions after a marathon negotiating session the night before ended without final agreement.

“The North is adopting a two-faced stance with the talks going on,” said the spokesman.

Yonhap news agency, citing military officials, said the submarine deployment was the largest since the end of the 1950-53 Korean War.

“No one knows whether the North will attack our warships or commercial vessels… we are mobilising all our surveillance resources to locate them,” it quoted one military official as saying.

The North operates more than 70 submarines — one of the world’s largest fleets — compared to about 10 in the South, according to Seoul’s latest defense white paper.

The South accused Pyongyang in 2010 of using a submarine to torpedo a Seoul warship resulting in the loss of 46 lives — a charge the North denied.

Tension flared on the Korean peninsula after Seoul accused Pyongyang of planting landmines across the border that earlier this month maimed two South Korean soldiers.

Pyongyang denied involvement but Seoul retaliated by resuming loudspeaker propaganda broadcast hated by the North along the border on August 10.

The North’s leader Kim Jong-Un last week ordered his military to move to a war-footing after an exchange of artillery fire on Thursday that claimed no casualties but further escalated tension.