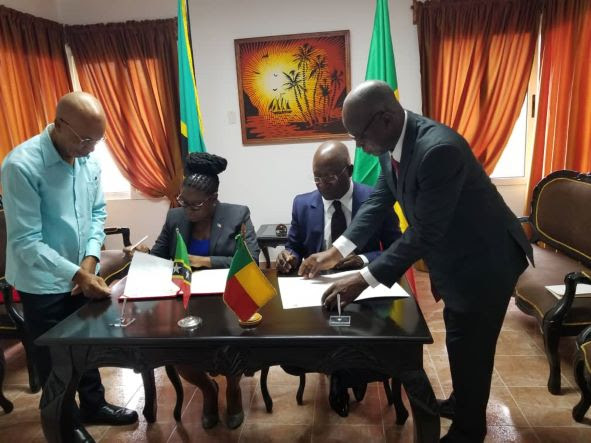 Basseterre, St. Kitts, June 7, 2022 (Ministry of Foreign Affairs and Aviation): Thursday, 2nd June 2022 saw the establishment of formal diplomatic relations between the Government of Saint Kitts and Nevis and the Government of the Republic of Benin. The Embassy of Saint Kitts and Nevis in Havana welcomed His Excellency Boniface Vignon of the Republic of Benin, who, together with SKN’s resident ambassador Her Excellency Mrs. Verna Mills, signed a Joint Communiqué establishing formal diplomatic ties. The occasion also saw the signing of a visa waiver agreement to facilitate ease of travel between the two nations.

The two diplomats agreed that signing this communiqué signalled an important step in promoting relations between both governments and peoples. They both pledged to advance the development of cordial, mutually beneficial relations through different areas of cooperation.

Also in attendance at the ceremony were Counsellor in Saint Kitts and Nevis Embassy in Havana, Mr. Winston Hanley and the Second Counsellor of the Republic of Benin, Mr. Flubert Macaire Dossa Adjovi.