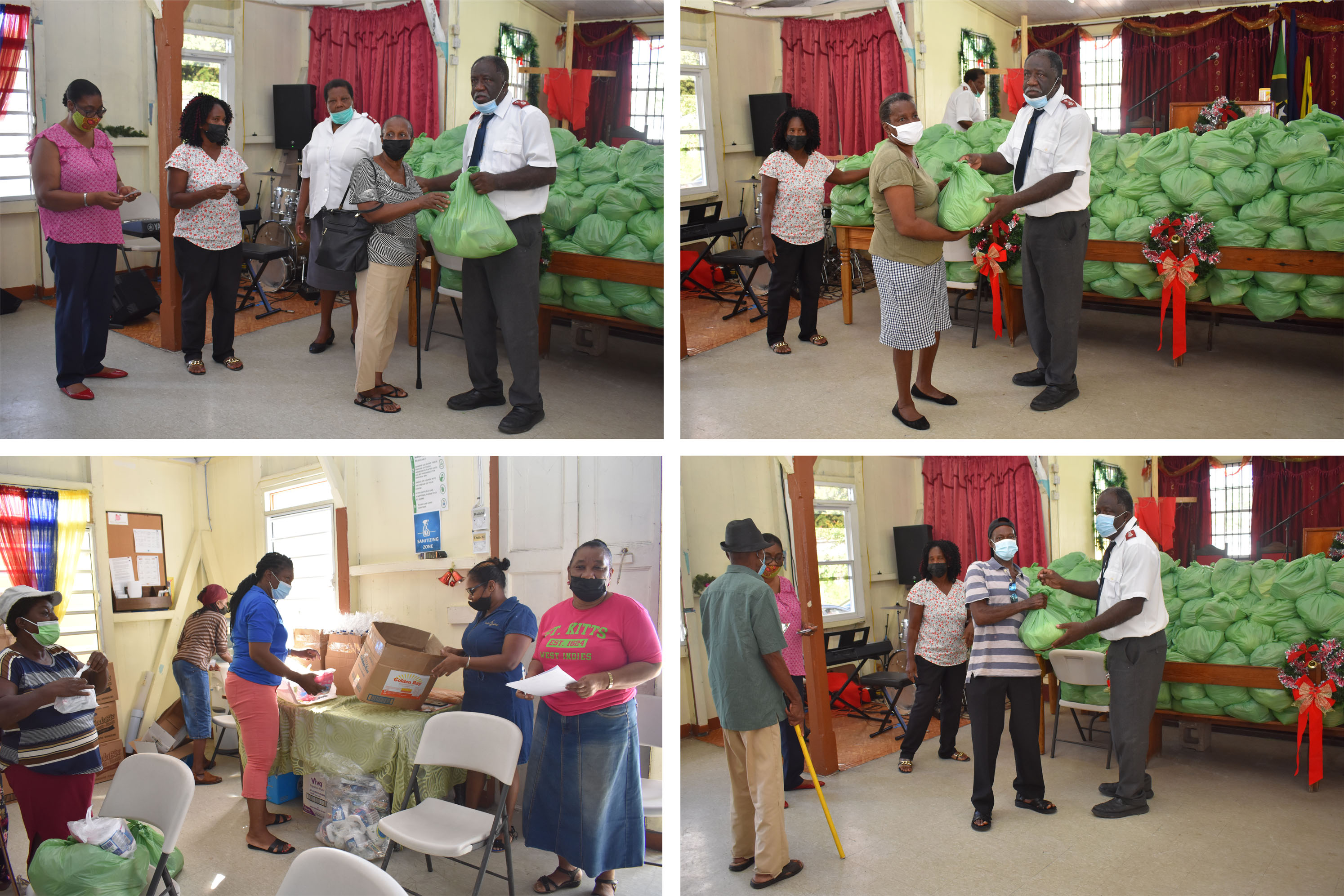 BASSETERRE, ST. KITTS, December 16, 2021 (MMS-SKN) — The Salvation Army Church in St. Kitts on Thursday, December 16 started the distribution of 240 Christmas food hampers made available as a result of its Christmas Appeal Ministry this year, and thanked their donors, among them the Governor-General His Excellency Sir Tapley Seaton, GCMG, CVO, QC, JP, LLD.

“One of our regular donors, and the highest office in this land, is Sir Tapley Seaton, the Governor-General of this Federation of St. Kitts and Nevis,” announced Commanding Officer, Pastor Major Roxroy Campbell, at the food parcel distribution function held in the church on Cayon Street in Basseterre.

According to Major Campbell, the church has an honorary advisory board that is headed by Mr. Denzil Crooke. Over the years the board has been partnering with the Ministry of Social Services in the distribution of the food parcels beyond the outskirts of Basseterre to other areas on the island, and the arrangement continues this year.

The Salvation Army Church Ministry was started in 1904 in St. Kitts and while they have one church in Basseterre, they have seen the importance of going beyond St. Kitts and making distribution of food parcels in Nevis. They did it for five consecutive years with the Ministry of Social Services in the Nevis Island Administration but due to the coronavirus pandemic, it was not done last year and will not be done this year.

“Using this platform, I want to give wonderful deep and profound thanks to our leaders, starting with Sir Probyn Inniss who has gone before us, and the now Governor-General Sir Tapley Seaton, who have given sacrificially over the years to support the ministry of the Salvation Army in our Christmas appeal,” said Major Campbell.

“The list goes on to the average person on the street who says I am making a contribution in thanksgiving to God to the Christmas parcels,” he added. “This year we will be giving 240 parcels and these will be given out to the persons here in Basseterre, and the rest of the communities here in St. Kitts. I am sure you want to say thank you, Jesus, thank you to the people of St. Kitts and Nevis, thanks to the love that is seen and shared in the lives of people.”

The Christmas appeal ministry was launched at the CIBC First Caribbean Bank in downtown Basseterre by the Circus. That has been the tradition from the days when it was known as Barclays Bank.

The Salvation Army Church has also seen the need to help people on the streets, and Sister Rosita Browne, Sister Dianne Hunkins, and Sister Mayretta Crosse, and others worked together with two Saturdays ago and did some lunches that were distributed around on the streets, in Basseterre and other areas.

“Over fifty cooked meals were delivered and we want to do this again, another Saturday, and as we go along to make this a part of our ministry because the Salvation Army has always been described as a church with its sleeves rolled up – the church with rolled-up sleeves,” said Pastor Major Campbell.

In the meantime, Major Marjorie Campbell said that this year the Salvation Army put out kettles at the doors of major supermarkets, Rams in Bird Rock, Valu Mart, and also a few days were spent at Best Buy in Camps. In Basseterre, they placed collection kettles in two locations which encouraged persons to look forward to Christmas.

“We want to say thanks to everyone who is listening to us today, who have contributed to the work of the Salvation Army through the kettles – the red spots, the red boxes – that were placed on the streets,” said Major (Mrs) Campbell. “We know we have the pandemic and the Covid is around, but praise God although we have that difficult time, we were still able to get contributions towards the work of the Salvation Army and as of this morning we have over 200 food parcels for distribution.”

Major Marjorie Campbell also explained that they had a mail appeal as well, which gave members of the business community the opportunity to participate by sending their contributions to the Salvation Army, and in that way, the church was able to do the annual Christmas Appeal work.

“We want to say thanks and as I said in my prayer, those of us who are receiving I hope that we are thankful for the people who have contributed,” said Major (Mrs) Campbell in conclusion. “Whatever the contribution was, we say thanks to everyone who contributed to the Salvation Army Red Kettle Drive 2021, and we will be here again if God spares us in 2022. Thank you and God bless you.”