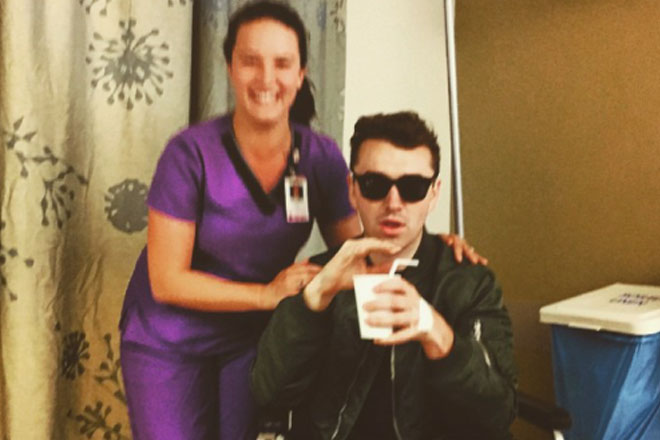 The British soul sensation, who enjoyed a meteoric rise thanks to his hit “Stay With Me,” underwent surgery at a US clinic after doctors detected a hemorrhage in his vocal cords.

Smith posted on Instagram a photo of himself after the operation in a wheelchair next to a grinning nurse and offered a one-word caption: “Flying.”

“Just woken up from op. I’m high on pain killers and listening to Whitney Houston hahahahaha,” he wrote on Twitter.

Smith, who turns 23 next week, earlier said that he would not be able to speak — let alone sing — for three weeks and cancelled a string of upcoming shows.

He thanked fans for messages of support, saying: “Makes me emotional to know I have so many people wishing me well.”

He did not say where the surgery took place, but posted pictures on social media in recent days of stops around New York.

He also posted pictures from Boston, and several fans reported seeing him there ahead of the surgery.

The Briton, who just a few years ago was a bartender in London, has maintained a punishing touring schedule as he gained a global following through “Stay With Me,” a tender ballad about a one-night stand.

Smith was the big winner at the Grammys in February, winning in three of the four most prestigious categories.