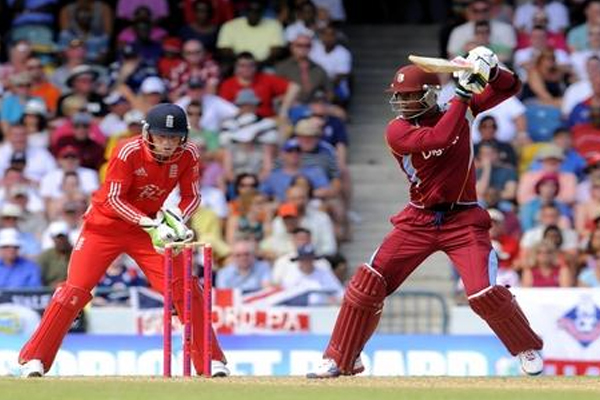 Bridgetown, Barbados — Marlon Samuels provided a support act to openers Dwayne Smith and Chris Gayle to help West Indies to a 27-run win over England to take a 1-0 lead in the three-match Twenty20 International series at Kensington Oval on Sunday.

Samuels played an unbeaten 69 as West Indies reached 170 for three and then restricted England to 143 for nine.

The West Indies won the toss and decided to bat first with a challenging start from Smith and Gayle. Smith was off the mark with the first ball, hitting Stuart Broad for six and West Indies piling 19 runs off the first over.

When Smith was bowled by Ravi Bopara for 27 in the sixth over, West Indies were already 57 runs rich and a showpiece of batting display by Gayle and Samuels.

Gayle scored a quick fire 43 off 35 balls including five fours and two sixes before leg before wicket to James Tredwell.

A 54-run partnership from 38 balls between Marlon Samuels and Andre Russell took West Indies to 170 after Lendl Simmons was dismissed for three.

Samuels’ half century came up off 28 balls and was unbeaten on 69 with Russell on 24, setting England a challenging 171 for victory.

“I’ve been working hard, it was a wonderful crowd so I had to come out and play. They loved Carl Hooper and I came out to play in his style. It worked out well for us as we have some wonderful spinners,” said Samuels.

Bopara (2-23) and James Tredwell (1-16) were the successful bowlers for England.

The visitors never seriously threatened the Windies’ total and were reeling on 55 for 5 midway through their innings.

Only Tim Bresnan and Ravi Bopara made useful scores to England’s total of 143 for 9. Bopara made 42 and Bresnan was unbeaten on 47 as Samuel Badree and Samuels made closed in on the victory.

Badree finished with 3-17 and Samuels 2-21 for the man-of-the-match award.

Sunil Narine bowled only two overs (1-8) as he was troubled by a knee injury.

“He’s being looked after, so fingers crossed everything is alright,” said West Indies captain Darren Sammy.

West Indies take a 1-0 lead in the three-match T20I series and will look to take an unassailable lead in the second match on Tuesday, at the same venue.