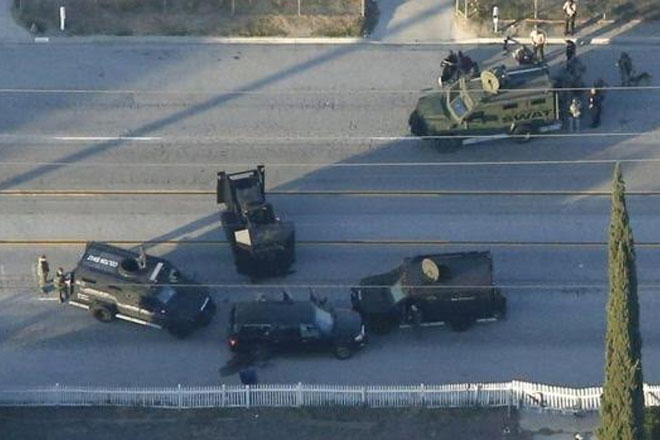 (BBC) Police in California have named two suspects killed after a mass shooting which left 14 people dead at a social services centre.

The man and woman, Syed Rizwan Farook, 28, and Tashfeen Malik, 27, were killed in an exchange of fire with police.

The attack took place at an event on Wednesday for Farook’s colleagues. None of the victims has been identified.

The Inland Regional Center, where the shooting took place, provides services for people with developmental disabilities, but the shooting appeared to be unrelated to its clients.

The incident marks the deadliest mass shooting in the US since 26 people were killed at a school in Newtown, Connecticut in 2012.

Mr Burguan, who said another 17 people were wounded, said police were “reasonably confident” that there were just two shooters.

A third person seen running from the scene was detained, but police said it was unclear whether that person was involved.

Both suspects were killed in their vehicle after a shoot-out with police involving 20 officers. A tip-off had earlier led police to a house in nearby Redlands.

The dead man and woman were believed to be a couple, the police chief said. They were armed with assault rifles and semi-automatic handguns and wore military-style clothing.

The US Bureau of Alcohol, Tobacco, Firearms and Explosives (ATF) told the BBC two of the four guns recovered were linked to “an individual associated with this investigation”. They are investigating the origin of the other two guns.

One police officer was injured, but his injuries are not life threatening.

Three possible explosive devices were found at the Inland Regional Center, where the shooting took place.

Mr Burguan said that Farook had left the event – which was possibly a holiday party for employees or a meeting – “under some circumstances that were described as angry,” and returned with Malik.

Earlier, the FBI said it was not ruling out the possibility of terrorism but the situation was still being investigated.

The attack took place in a conference area where the San Bernardino County Department of Public Health was holding a social event, said Maybeth Field, the centre’s president.

Farook, who was born in the US, worked for the county as an environmental health specialist, police said. They had no information on whether he had a criminal record, nor further details on Malik.

Colleagues told the Los Angeles Times that Farook had travelled to Saudi Arabia and returned with a new wife. The couple had a young baby, they said.

Farook’s brother-in-law Farhan Khan told a press conference he had “absolutely no idea” what could have prompted the shooting.

US President Barack Obama said in response to the shooting: “One thing we do know is that we have a pattern of mass shootings in this country that has no parallel anywhere in the world.

“There are some steps that we could take, not to eliminate all incidents, but to make sure they happen less frequently.”