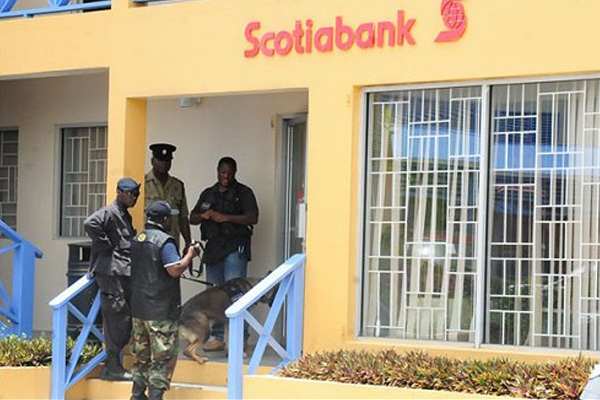 ZIZ News — Nevis’ Capital City of Charlestown was the hub of much activity on Monday 23rd June, when the Bank of Nova Scotia was bombarded by gunmen who robbed the bank of an undisclosed sum of money.

According to information reaching ZIZ News, four masked and armed assailants entered the bank between 11:00am and 11:15am, robbed the bank and left employees and patrons traumatized.

ZIZ News caught up with Inspector Lyndon David from the Royal St. Christopher and Nevis Police Force who filed this report.

“Four armed, masked assailants entered the bank and demanded money from bank tellers. At the time of the incident, there were patrons in the bank, none of them were hurt at the time or robbed however, the assailants made off with an undisclosed sum of money in a vehicle. An intensive search was made by police. The vehicle was found in the Hamilton mountain area and the vehicle is now in police custody. Our investigation revealed that the vehicle may have been stolen from the owner in order to carry out this crime,” Inspector David stated.

Inspector David then used the opportunity to solicit the support of the community in solving the crime.

“At this time, we are asking members of the public who may have information pertaining to this incident to call the Charlestown Police Station…or give the information to the nearest police station or crime stoppers. Crime stoppers is 1-800-8477 or 1-800-tips,” he ended.

The Charlestown branch of the Bank of Nova Scotia is one of three branches in the Federation. It is the only branch on Nevis.