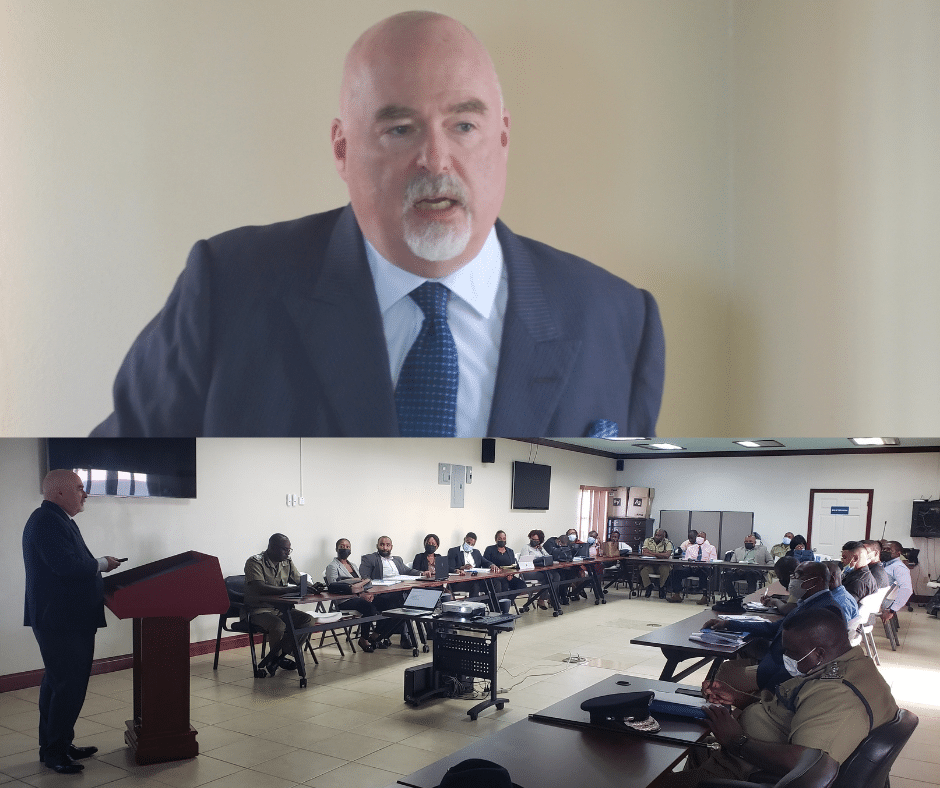 Basseterre, St. Kitts, February 24, 2022 (RSCNPF): Several Police Officers have benefitted from a two-hour discussion with His Lordship Justice Iain Morley Q.C. on how to increase the movement of cases through the justice system.

Justice Morley coordinated the activity with Commissioner of Police Hilroy Brandy. It was held at the Customs and Excise Department’s Conference Room on Wednesday, February 23, 2022. In attendance were Assistant Commissioners of Police Andre Mitchell and Adolph Adams, and several other senior Police Officers. Prosecutors from the Office of the Director of Public Prosecution (ODPP) were also present.

“What we have done is that we had a meeting of the senior police officers along with the members of the ODPP for a neutral discussion about how to improve the throughput of work through from charge to the court through to a result whatever the result might be. Because there are inefficiencies in the system, everybody agrees, and the challenge is how do we put those inefficiencies right,” Justice Morley explained.

The High Court judge described the meeting as “a very positive experience.”

He said that while there were a number of reasons that contributed to the length of time it took for cases to be completed, several recommendations to address some of them were put forward.

“They’ll be all sorts of issues, some of which are more immediately controllable than others, but the most important thing is that we’ve identified what they are, and we’ve done a lot of good work on that…we have some ideas of how to deal with the problem having identified them and we’ve come up with some very good ideas today. We haven’t covered everything, but we have made some progress and there’s been some positive vibes within this big group.”

Justice Morley expects to have a follow-up discussion in the near future to assess what improvements had been made as a result of the meeting.