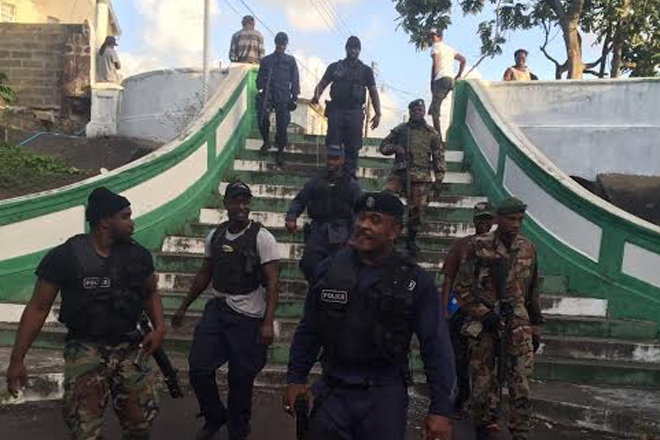 A combined operation this morning Saturday (February 13) by officers of the Special Services Unit (SSU), the St. Kitts and Nevis Defence Force and a canine team from Her Majesty’s Customs and Excise Department in the McKnight area, resulted in the seizure of a quantity of marijuana and the arrest of one person.

This morning’s operation was one of many carried out in recent days by the Police on both St. Kitts and Nevis as the Force continues its efforts to rid our communities of illegal drugs, firearms, ammunition and other instruments that can be used in the commission of crimes.

The operation which began before dawn was specific to known locations on Salt Pond Alley, Malone Avenue, Cunningham Street and Upper and Lower Shaw Avenues. A number of foot patrols were also conducted by the search units and fifteen 15 abandoned properties in the area were searched.

In commenting on this morning’s operation, Commissioner Queeley expressed the appreciation of the High Command to all the officers for their vigilance in the last weeks. He said, “ongoing initiatives like these, that have an increased Police presence in our communities, results in less criminal activity, and a reduction in the fear of crime.”

The Commissioner added, “what is critical to the success however, is a partnership with our citizens, our communities….and continue to support us in our efforts to make our communities safer.”