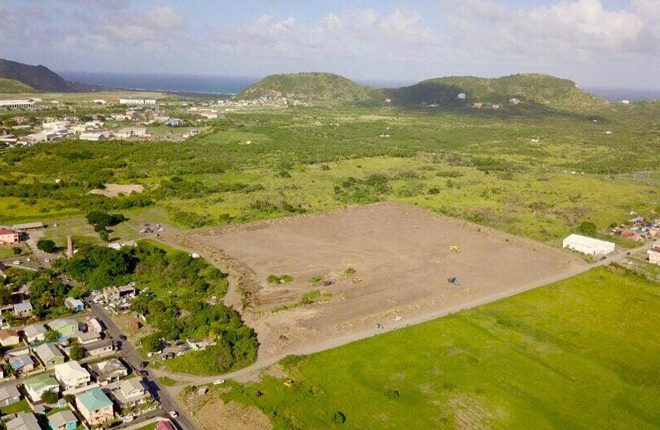 Basseterre, St. Kitts, November 23, 2018 (SKNIS): Plans for the construction of the new state-of-the-art Basseterre High School (BHS) is advancing as the site at Pond’s Extension in East Basseterre has now been cleared.

The construction of the new school has been in the works since 2015 and the government has been leaving no stone unturned to ensure that the environs are properly cared for during the building stage and after the institution is opened.

A number of working committees were put in place to spearhead the preliminary task in the process of constructing the new BHS. One such committee was the SKN Water Working Group, which was assigned the task of selecting the site on which to build the new school.

The size of the parcel of land designated for building the new BHS is approximately 14 acres.

At a press conference held on August 02, 2017, the Prime Minister, Dr. the Honourable Timothy Harris said that the choice to place the school near to the aquifer was not chosen on a whim, but that it was well thought out and professional advice was sought. He said that several sites were discussed with technical persons and a system of evaluation was put in place. They considered the sites and made a short list.

“We then as another mark of precaution, submitted that list conscious that one of the areas was the area around which the aquifer and watershed presumably lay,” he explained. “We gathered the best team of experts in water management issues including Dr. Halla Sahely who is a former head of water management and a knowledgeable expert in the area. We included [persons with] the best competency we had available in the island Nevis, including persons from abroad. We said put all of them together, including Athill Rawlins (Former Manager/Water Engineer).”

The best minds then in water management looked at all the sites and gave the government the go ahead, said the prime minister. [They said] that there should be no reasonable challenge to the aquifer and to water quality when they proceed because certain best practices were observed.

The health and wellbeing of the students and teachers of BHS and the preservation of the watersheds, aquifer, water quality and yield will never be taken for granted by the government, said the prime minister. He added that it will apply the best standards to seek solutions in the public interest.

“We will never gamble with the lives and wellbeing of our citizens. The advice we have had so far gives us confidence that we are on the right track,” said Prime Minister Harris.