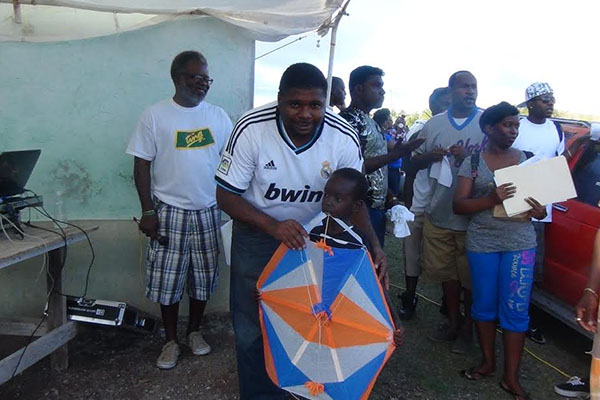 The action started off slowly and for one fleeting moment it appeared as if for once the annual SJCIC kite flying competition and family day would not be as well attended as in previous years.

Up to noontime on Friday 18th April or GOOD FRIDAY, only one of the registered kites was on display.

However, shortly thereafter, the competitors brought their kites with various designs and in various shapes and sizes to be judged for the usual grand prizes.

Hundreds of individuals soon started to flock the grounds. Some of them bringing their family members to fly their personal kites.

The venue as per usual, was the FLATS in Cole Hill and this year, the Department of Youth and Sports teamed up with the long serving SJCIC to host the signature event.

The Youth and Sports Department was responsible for the hosting of the Domino competition and the Cricket competition which saw four teams competing for a winning prize of $1,000.00 and a second placed prize of $500.00 which were sponsored by Minister of Sports, the Hon. Mark Brantley.  This winning prize was eventually won by a Guyanese based team.

The vendors also showed up in their numbers and the usual Easter weekend delicacies were very much available.  These included: Konkis; cassava bread; salt fish and Johnny cakes; fried fish and the like.  Additionally, there was the usual sarsaparilla, ginger beer and jelly water.

As for the kites, the competitors were at their innovative best. There was a kite representing the national flag of St. Kitts and Nevis. There was one representing a Samsung galaxy mobile phone.  There were box kites and paper kites among others.

At the end of the day, the veteran Arthur CABBAGE Farrell was the ultimate winner as he walked away with several of the big prizes.

The judges assessed the winners as follows:

Another feature of the day was a raffle specifically organized for the children, free of cost where they registered and qualified to win kites sponsored by the Hon Troy Liburd.  The six winners were called out intermittently during the day’s proceedings.

The sponsors of the event were:

The Ministry of Social Development

The Department of Youth and Sports