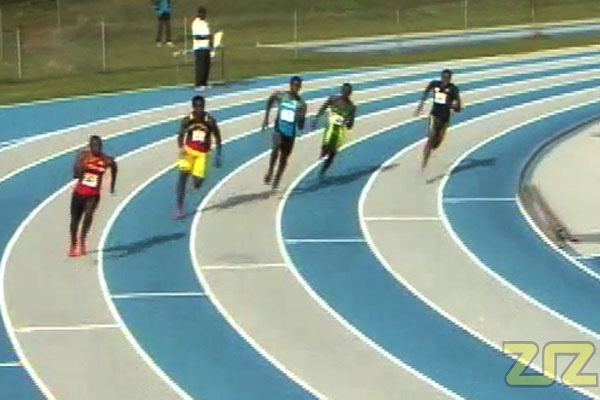 (ZIZ)– Team St. Kitts and Nevis proved its dominance over the rest of the OECS region in the sprint events on day one at the 2014 OECS Track And Field Championships on Saturday.

In the Men’s 200 Meter Dash Senior Open Final, 2012 Olympian and World Championships bronze medallist Brijesh Lawrence defeated a field of seven other competitors to win the gold medal in a time of 20.59 seconds.

St. Kitts and Nevis also took the top spot in the Women’s 4×100 Meter Relay Senior Open Final. The quartet of Meritzer Williams, Marecia Pemberton, Shenel Crooke and anchor Virgil Hodge convincingly won that the race in a time of 45.99 seconds.

In second place with a time of 47.09 seconds was team Antigua and Barbuda while the women of St. Vincent and the Grenadines finished third in a time of 48.96 seconds.

On the men’s side, the quartet of Delwayne Delaney, Brijesh Lawrence, Allistar Clarke and Lestrod Roland staved off fierce competition from Antigua and Barbuda to win the race in a time of 39.38 seconds.

Antigua and Barbuda was close behind and finished in a time of 39.86 seconds. St. Vincent and the Grenadines placed third in that race.

The championship continued on Sunday with the finals of the 100 and 400 meter races, the men’s high jump, the men’s javelin throw and the women’s long jump.