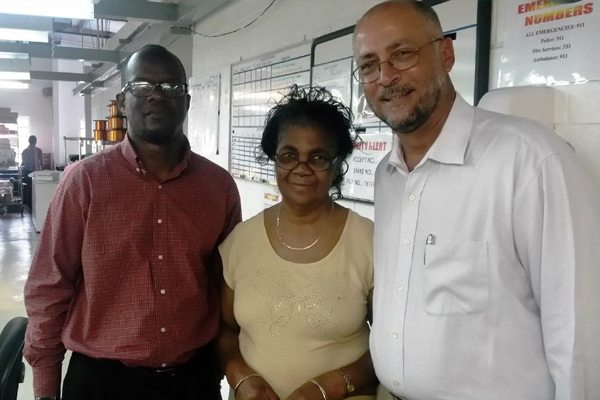 Minister Skerritt responsible for International trade, Industry, Commerce and Consumer Affairs and Minister Nisbett who is responsible for Foreign Affairs, Homeland Security, Labour, Justice and Legal Affairs, both observed the precision – quality assembly operations and discussed matters related to the future plans for expanding the company’s operations to meet the improving market demand for their products.

In an exclusive interview with SKNIS, Minister Skerritt pointed out the Government’s stance on the manufacturing progress in the Federation.

“The Government is actively supporting efforts by the manufacturing sector to return to growth after a period of contraction in the marketplace,” Minister Skerritt stated. “This includes plans for additional factory space to be constructed for Harowe Servo Controls.”

“Harowe Servo is one of the better quality employers in the manufacturing sector,” Minister Nisbett noted. “They provide a good example of mutually beneficial employer-employee relations.”

The Ministers met with several members of staff, including the oldest employee, Ms. Winifred Andrew who has been with the company from its first day of operation. She expressed her pleasure of working with the company over the years. Several other employees expressed similar sentiments of job satisfaction.

API Harowe Servo is one of the oldest manufacturing operations in the Federation. The Company commenced its operations in 1974 and has continued to expand its operations as market demand required over the years. The Company currently occupies approximately 17,000 square feet of factory space and employs (directly) over 205 persons, of which more than 95 percent are women. There are also five PEP funded employees who are undergoing production line training.

The company produces Precision Motors for the factory automation and aerospace markets and feedback devices for medical equipment. The motors are fractional horsepower AC, DC and DC brushless types. The feedback devices consist of tachometers, synchros and resolvers. More than 75% of the products manufactured at Harowe Servo are exported to the USA, China and the European markets, which allows the company to use the trading concessions offered under the CARIFORUM-EU Economic Partnership Agreement (ACP) and the Caribbean Basin Initiative and the CPBTA.

API Harowe Servo is hoping to grow its production line to meet increasing demands in the market it currently serves. It is expanding its factory space by another 3000 square feet to prepare for the implementation of the Brazil-Guyana-St. Kitts & Nevis Partial Scope Agreement (PSA), which will give duty-free access to the potentially lucrative Brazilian market.