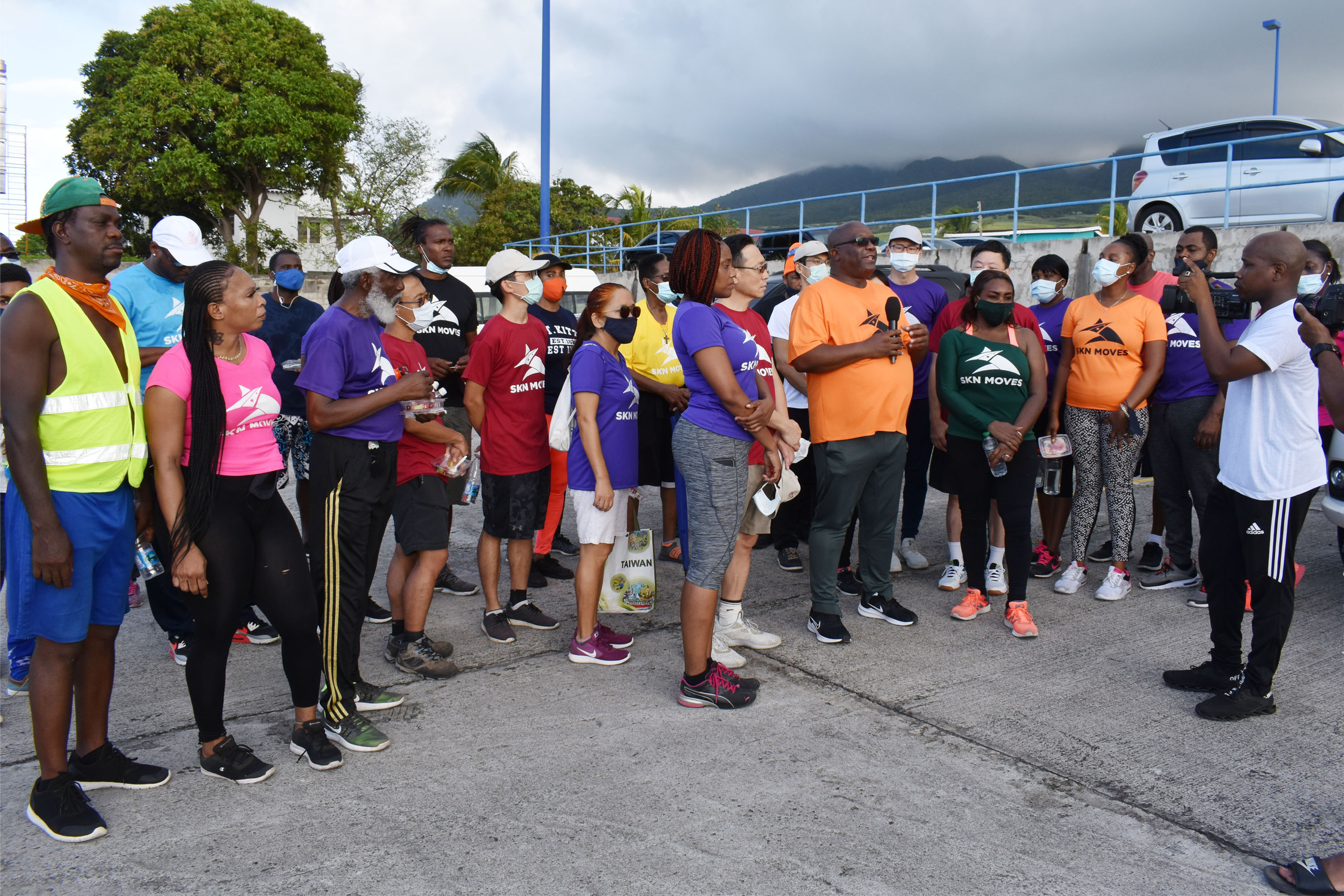 SKN Moves To Partner With Ministry Of Education In Fight To Reduce NCDs, Says PM Harris

BASSETERRE, ST. KITTS, August 7, 2021 (MMS-SKN) — The St. Kitts and Nevis (SKN) Moves is an initiative of the Ministry of Health aimed at reducing the burden of non-communicable diseases (NCDs) by creating a healthy lifestyle culture, and for it to succeed in its mandate, Prime Minister Dr. the Hon Timothy Harris is recommending that it should inculcate persons at a young age.

The St. Kitts and Nevis (SKN) Moves which is observing a slate of celebratory events spanning a seven-week period to mark its second anniversary, held the marquee celebratory event – a health walk – on Saturday August 7. The events are being held by the Ministry of Health in collaboration with the Office of the Prime Minister.

Leading the participants in the event which saw them walk from Caribbean Cinemas, along F. T. Williams and Kim Collins Highways to the roundabout at the Eastern Caribbean Central Bank and back through Ponds Road and Cayon Street, were Prime Minister, Dr. the Hon Timothy Harris, and Minister of Health the Hon Akilah Byron-Nisbett.

Commending Permanent Secretary in the Ministry of Education Mr. William Vincent Hodge, who was a walk participant, Prime Minister Harris observed that what government and SKN Moves are attempting to do now is to inculcate people at a very young age – in pre-schools, primary schools, and secondary schools. He pointed out that if they succeed, they will have less work to do with the adults.

“We are going to partner strongly with the Ministry of Education because they control the largest number of young people,” said Dr. Harris.

Noting that pre-schools, and primary schools have a population of around 5,000 and secondary schools with over 4,000, then within the education sector they have a large proportion of people in a population of just about 47,000. He remarked: “So imagine if we start there – how much stronger and safer we will be.”

Addressing participants at the end of the walk, Dr. Harris who also has lead responsibility for Human Resource Development, Health and HIV/AIDS issues in the CARICOM’s quasi-cabinet, noted that St. Kitts Nevis (SKN) Moves is part and parcel of the Caribbean Moves initiatives that was launched by the CARICOM heads.

He noted that the CARICOM heads recognised that the Caribbean region and the CARICOM in particular had been much challenged by non-communicable diseases (NCDs) which are linked largely to habits of people who drink too much of the wrong things, and who do not exercise enough among others.

“Way back the CARICOM heads were able to get non-communicable diseases (NCDs) on the global agenda for attention so that the world could focus its energy in assisting us and assisting everyone affected by NCDs in living a healthier life,” he added.

Minimising, if not avoiding, the use of alcohol, doing away with smoking, and engaging in more physical activities would be critical in achieving the desired goals. He said that the St. Kitts Nevis Moves is about physical activity, with everyone finding something to do, whether it is walking, running, cycling, swimming, noting that there are so many activities and the more that persons do leisurely, the more healthy they can be in body and mind.

“So I am happy that with our learning to live better with Covid, we could gather and execute this because healthy living is still a must,” said Prime Minister Harris. “It is still necessary and the good thing about it, the power lies in each of us – what we do, what we say, how we think, all these we can control with effort.”

The Prime Minister thanked all who participated in the walk, notably the young people who had turned out in their numbers, and the delegation from the Embassy of the Republic of China on Taiwan led by the new Ambassador, His Excellency Michael Lin. He thanked the new ambassador for participating in the health walk at the commencement of his tenure. Ambassador Lin also participated in Prime Minister’s Monthly Health Walk held on Saturday July 31.

Before the participants set off, they were addressed by Permanent Secretary Dr. Delores Stapleton-Harris, and Non-Communicable Diseases Programme Coordinator, Dr. Marissa Carty, who gave details of celebratory activities taking place. Week One which celebrated World Breastfeeding Week was observed in the period August 1-7.