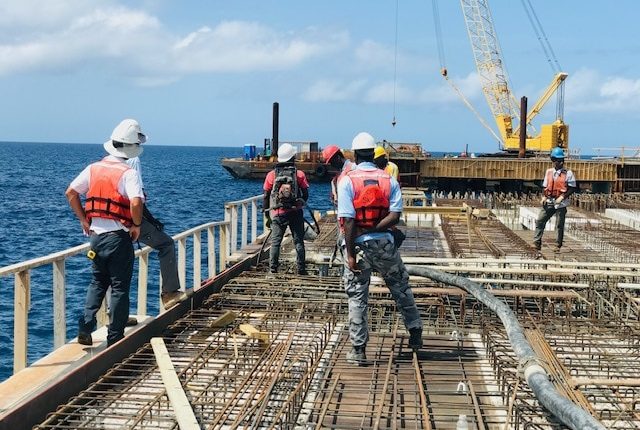 Basseterre, St. Kitts, August 20, 2019 (ZIZ News): St. Kitts and Nevis will soon be the only developing country in the world to host three of the world’s largest cruise ships at the same time.

That is according to Minister of Public Infrastructure, Hon. Ian Liburd who was the addressing media officials following a Media tour of the Second Cruise Pier on Monday.

He also revealed that the next phase of the Second Cruise Pier project will include the construction of a new terminal building at Port Zante to accommodate the additional cruise passengers.

He then explained that the new Terminal which will be controlled by SCASPA will be constructed east of Port Zante to accommodate tour operators.

“We will have a dispatch terminal that will be constructed east of Port Zante to comfortably accommodate the Taxi operators and independent tour operators. SCASPA will assume full control of the operations here at the terminal, splash zones and sterile areas of Port Zante”, Minister Liburd explained.

Construction of the Second Cruise pier began in June 2018 and is expected to be completed in September 2019.