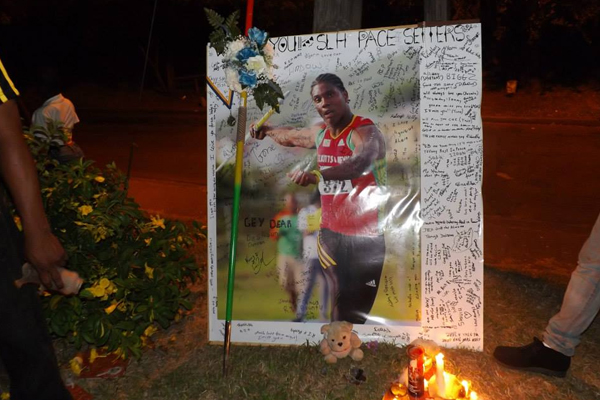 Eighteen-year-old J’Anthon first burst onto the athletic scene in 2011, when he attained a qualifying standard in the Boys Javelin Throw for the CARIFTA Games which was held in Montego Bay, Jamaica. J’Anthon was later selected to be a part of the National Representative Team and was able to secure the Bronze Medal in that event while his counterpart Adrian Williams won the Gold Medal.

He competed at other regional and international meets such as the Commonwealth Youth Games in 2011 (Isle of Man), the CARIFTA Games in 2012 (Bermuda) and 2013 (Bahamas), 2013 CAC Juniors A and B Championships (El Salvador) and most recently, the 2013 PAN American Junior Championships (Colombia).

According to Glenville Jeffers, President of the SKNAAA “J’Anthon was a part of the revolutionary process of bringing attention to the field events. He was a very ambitious and goal oriented young man with plans of excelling in the sport. He had an affable personality and was well-liked by athletes, coaches and members of the Association alike. We were all deeply saddened by the news of his passing.”

J’Anthon is the defending Leeward Islands Junior Champion having copped gold in the Javelin Throw at the meet held in Tortola, BVI in  June. His personal best is 60.24 meters, a distance he attained when he won the Gold Medal at the 2013 National Invitational and Club Championships, at the Silver Jubilee Stadium, Sunday 16th June 2013.

As a prominent junior athlete, J’Anthon exposed himself to other field events including Shot Put, Discus Throw, Long Jump and High Jump. He did not limit himself to track and field events, however, as his recreational skills included football and basketball.

On Sunday 29th September 2013, the S. L Horsfords Pace Setters Track Club held a candle light vigil in honour of his life. The event attracted over 200 persons who were able to share their grief with his family, friends, club mates, fellow athletes and other well wishers. Also in attendance were faculty members and students of both the Verchilds High School and the Clarence Fitzroy Bryant College as J’Anthon had in July graduated from Verchilds High and enrolled at the CFBC in September. The vigil was held on the lawns of the Green Tree Housing Residence, which is approximately 100 meters away from the home he shared with his parents and siblings. His personal Javelin Rod was staked in the ground next to a large portrait of him which attendees were able to sign.

“We will miss him dearly!” said Lonzo Wilkinson, his Club President, former high school teacher and personal coach. “I am still in state of shock and sorrow at the moment. He was a prominent and promising athlete who year after year registered improved performances in his event. I can only pray that in time, his family and loved ones can heal as his loss will remain a void in our community.”

The funeral service of the late J’Anthon ‘Bounty’ Silliday will be held on Thursday, 10th October 2013 at the Roman Catholic Church in Old Road. Viewing will start at 12:30pm followed by tributes. The service will commence at 3:00pm.

The SKNAAA Executive along with the entire athletic fraternity would like to express our condolences to the family of the late J’Anthon Silliday. His legacy will remain with us as one of the pioneers of javelin in the Federation and the entire Caribbean Region by extension.