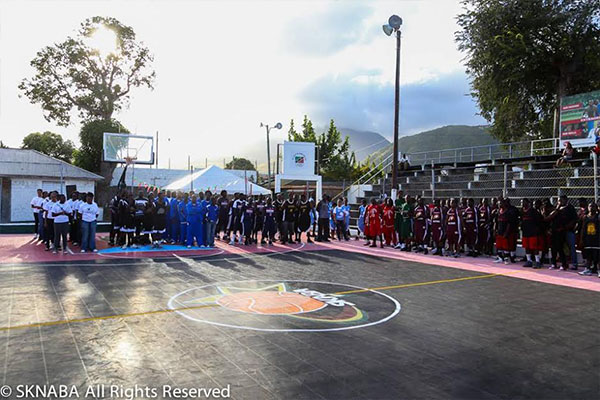 The 2014 SKNABA Basketball League Opened this past Sunday May 4th with a very impressive March Pass, Opening Ceremony and Opening Night Games.

The Opening began with a procession of teams beginning at the Basseterre High School Grounds across from the Basketball City Venue. This was a nice and well received segment of the event as approximately 20  of the 36 registered Teams impressively marched into the Venue as SKNABA , NOC and Other Officials along with a large crowd of spectators and fans , looked on .

The atmosphere was exciting and colourful as many of the teams boasted brand new uniforms. The assembly of teams and spectators were addressed by the SKNABA President Kenroy Tobias. Vice President Emmelita Warner-Paul Chaired the afternoon’s ceremony and Assistant General-Secretary DeNorzo Dore gave the Vote of Thanks. The Ceremony and Opening Night Games were graced by the presence of the Former Governor-General and Patron of BASKETBALL Sir Dr. Cuthbert M. SEBASTIAN as well as President of the St. Kitts NETBALL Association Mrs Juliette Hanley-Liburd. Also present was President of the NOC Alphonso Bridgewater and General Secretary Glen Jeffers. Immediate Past President of the Dominica Amateur Basketball Association Mr Mickey Joseph was also present at the evenings event.  Visibly absent was any representative from the Ministry of Sports or the Minister of Sports himself Hon. Glenn “Ghost” Phillip who is a SKNABA Legend and former National Basketball Team Captain and Coach and the first Basket baller from the federation to earn and complete a full basketball scholarship.

There were three exciting season openers played on the Opening Night.  In a one sided but yet exciting opener of the men’s “A” Division, St. Pauls Tuff Knots defeated recently relegate Fig Tree Dirt Revellers. Both teams are former Premeir Division and National League Champions who are now in the “A” Division trying to make there way back up to the Premier Division.

There was also a J-League Country vs Town All Star game in which the Country All Stars trounced their counterparts from town.