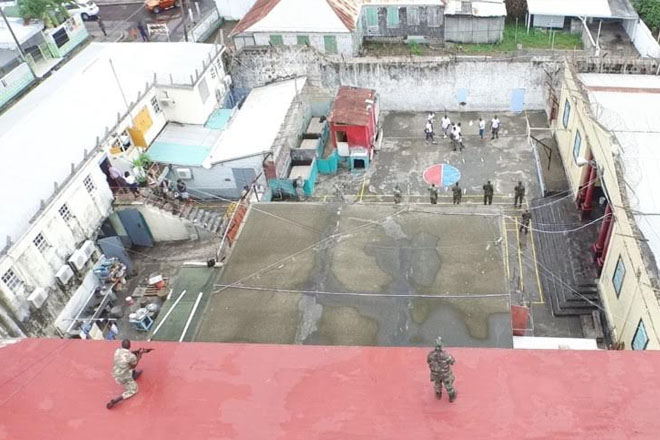 Basseterre, St. Kitts (SKNIS) — The utilization of Unmanned Aerial Vehicle (UAV) technology by the St. Kitts-Nevis Defence Force (SKNDF) during Tradewinds 2015 was a display of forward thinking and a clear demonstration of the embrace of technology that surprised many partnering countries and agencies, in particular the United States Southern Command.

Commonly referred to as “drone” technology, the UAV brought to the playing field by the SKNDF, played an integral part in the simulated exercise held on St. Kitts-Nevis recently. The drone was deployed during the exercise to support elements of the Defence Force and the Regional Security Service (RSS), during the aftermath of Hurricane Cristobal, a simulated category 3 storm which provided the backdrop for the prisoners at Her Majesty’s Prison to orchestrate a disturbance.

According to a Defence Force Officer, “The drone provided commanders with an “over the wall” view of the inside. Based on the video link provided by the UAV, the on scene commander was able to make the best tactical decisions as to how to deploy his resources and quell the disturbance.”

“The employment of the drone in the exercise showed our tactical competence, and surprised many of our partners and created great excitement; our Southern Command trainers and evaluators were impressed at the embrace and tailored use of this technology,” said SKNDF Public Relations Officer, Captain Kayode Sutton.

Captain Sutton further stated, “Drone technology has been employed by the SKNDF for some time now, and is routinely used in our counter-marijuana cultivation efforts. We have used the drone in search and rescue operations in the mountains as well,” he added.

According to Captain Sutton, this employment of a (UAV) was the first in Tradewinds, and shows how new technology can be used to effect and enhance national security efforts.

“Our partners were impressed and our force was proud to showcase our capabilities,” he said.