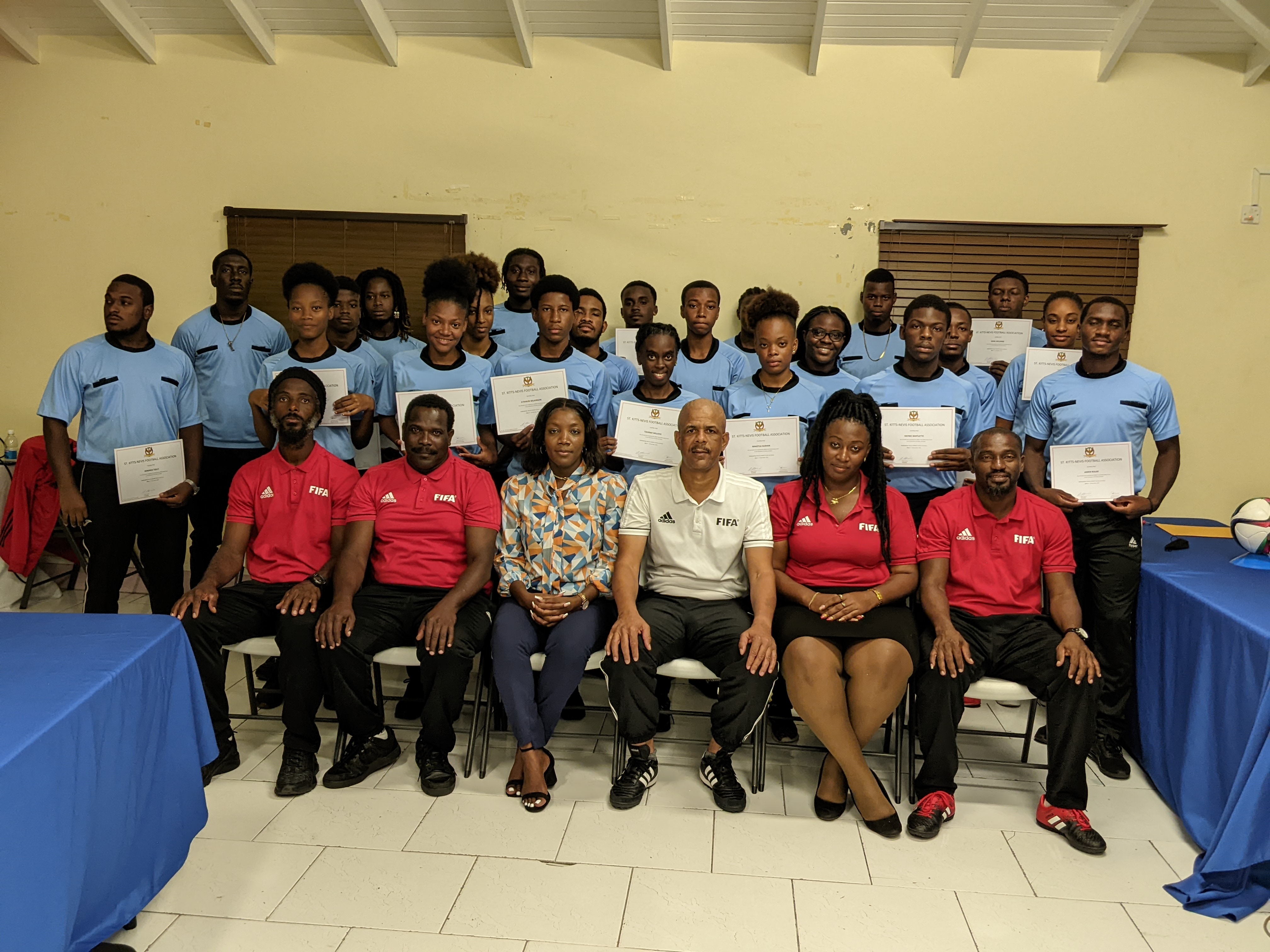 Basseterre, St. Kitts, December 16, 2021 –The Youth Referees Course organized by St. Kitts and Nevis Football Association (SKNFA) Referee Department, officially closed on Monday night with a closing ceremony at Football House. General Secretary of the SKNFA Techell Mclean, congratulated the participants for successfully completing the course. “This course offered these young men and women an opportunity—an opportunity to be a referee in our local leagues, but on a much larger scale, to be called by FIFA or Concacaf for an appointment in the international arena,” she said. “This course taught our participants the skill, which if molded, can take our young men and women anywhere in the world to represent our country as ambassadors. Most importantly, this course taught you discipline,” she continued.

Some of the participants were presented with refereeing uniforms, as they are expected in the future to be given the opportunity to officiate games at the junior level. All the participants received certificates for successfully completing the course and five of them received special awards.  These special awards were in the category of Most Improved which went to Byron Phillip, Most Punctual to Raynic Bartlette, Most Attentive: Chevaun Walwyn, Best Behaved: Mekhalah Dillon Sirjue, and a two-way tie for the most outstanding participants, Jaden Rouse and Gidal Williams. The participants who received certificates are Chevaun Walwyn, Lenroy Parris, Tyra Wilkinson, Ulinda Warner, Jaden Rouse, Yohan Henderson, Kenwin Collins, Eversley Davis, Gidal Williams, Kendell Fahie, Tahirah Willock, Raheem Rogers, Judene Tyson, Byron Phillip, Arianna Byron, Makeyla Audain, Raynic Bartlette, Aldrette Nisbett, Mekhalah Dillon Sirjue, Sahier Burton, A’Shaun Wilkinson, and Mandel George.

The participants surprised Mr. Malcom Ramsey, Referee Instructor and Head of the SKNFA Referee Department with a gift for sacrificing his time to train the young referees. He in turn presented the gift to general secretary Ms. Mclean for her support of the course. “I would like to present this gift to the general secretary who was very supportive of this course…everything that we’ve asked for we were able to get. We only had two hiccups and life is about hiccups. Madam secretary we really appreciate (your support),” he said, adding that he will be approaching her for more support with an upcoming women’s course soon. The referee instructors present at the closing ceremony also received certificates. These are Kenny Martin, Delroy Jeffers, Kendrea Tully, and Lloyd Rouse.