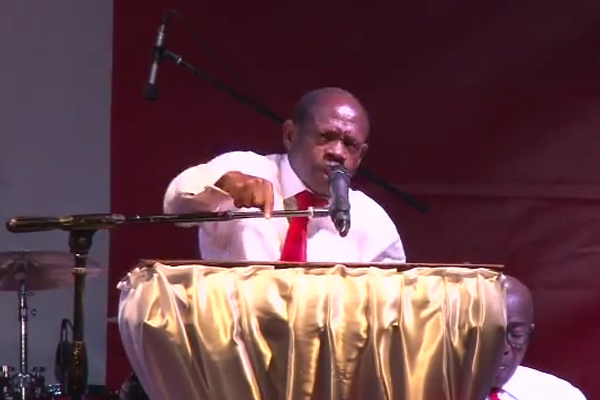 (ZIZ News) — It was a sea of red on the Bay Road on Saturday night as the St. Kitts -Nevis Labour Party [SKNLP] launched its 2015 Election Campaign.

Hundreds of supporters turned out at the shoreline as the SKNLP candidate for each constituency was introduced.

Leader of the SKNLP, Prime Minister the Right Hon. Dr. Denzil Douglas said the success of the country would not have been possible without the support of the people and his Cabinet, and the foundation laid by past Labour stalwarts.

“…the stalwarts of our Labour Party Foundation, who have made it possible for us to be assembled here to lead again on their behalf, so that the people can have social justice and freedom so that their children can live in a free country, not only this generation and the one after but generations to come far into the future,” he said.

He called for the public’s support as his party goes into the next election and urged everyone to exercise their constitutional right to vote.

Dr. Douglas also encouraged members of the public to throw their support behind the candidates for the Nevis Reformation Party and the alliance’s “Contract for Progress”.

The rally was part of a series of events being planned as the Labour Party intensifies its campaign, all leading up to Federal Elections on February 16.