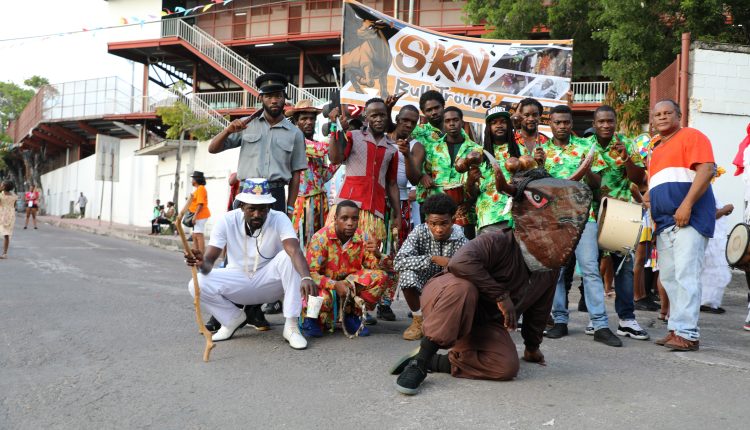 The St. Kitts Nevis National Carnival (SKNNCC) and the Ministry of Tourism are working closely with regional Governments and Carnival Committees to share our Culture and Carnivals.

This Program, which is part of the vision of the current SKNNCC, aimed at regional integration via Carnival and Culture, began in 2018 and was endorsed and funded by the Minister of Culture, the Hon. Shawn K. Richards.

Thousands of people lined the streets and were mesmerized by the pulsating music and rhythmic body moves of both Troupes.  In an Interview on ABS, Kishshawne Huggins, the Captain of the Huggins Masquerade Troupe explained the dance, music, costume to the Public and thanked all the Organizers for allowing them the chance to share St. Kitts-Nevis Culture.

Mr. Huggins also got an opportunity to pose with the Captain of the Montserrat Shamioles, which is their version of Masquerades.   Both Troupes participated in the Grand Parade on Tuesday August 6th, as well.

The Folklore Troupes and Media Team were scheduled to return on Wednesday August 7th.