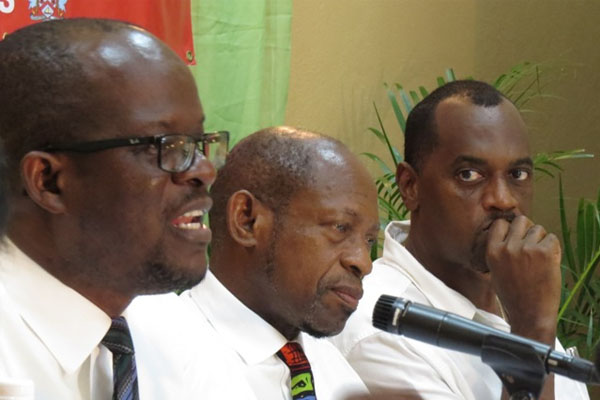 During the first Nevis edition of “Conversations for Progress,” at the Jessups Community Center Wednesday night, Prime Minister Douglas, praised Minister Nisbett, who has been member of his Cabinet since January 2010, for being “calm, far-thinking, wise and sober approach to governance, and for the steadfastness with which you have always attempted to serve the interests of your country, and the interests of Nevis, above all else.”

Dr. Douglas told hundreds inside the standing room hall and watching on a large screen monitor outside, that the Nevisian-born Nisbett has truly distinguished himself as Federal Minister.

“And I want to thank him here this evening for his sterling service to our nation. The ways in which he has advanced the interests of our Federation are multifaceted – and a matter of historical record. And so, whether one is talking about the strides that our Government has made in the area of minimum wage increases, or one is talking about the historic establishment of a long service gratuity for employees throughout the Federation, for example, compelling evidence of Minister Nisbett’s insight, analysis, and recommendations abound,” he said.

“As Minister of Foreign Affairs, this son of Nevis has served our country wisely and well – establishing new and important bilateral relations with important sovereign partners around the world, on the one hand, and strengthening those relations that were already in place when he became a member of the Federal Cabinet, on the other.”

He said it was so easy to sum his efforts up in a few short words.

“However this ease of description unfairly disguises both tremendous amount of time and effort that was required to bring these changes into effect, as well as the serious long term benefits which their enactment guarantees. If we look at our minimum wage legislation for example: St. Kitts and Nevis was already a regional leader where the wages that can be paid to workers – by law – is concerned. Despite this, Minister Nisbett and our Minister of Health, Community and Social Development, Culture and Gender Affairs, the Honourable Marcella Liburd worked assiduously, on behalf of workers of this country, to ensure St. Kitts and Nevis’ wage leadership position was not only maintained, but indeed extended.”

Dr. Douglas said that effective this Saturday, November 1, the minimum salary that any employer will be able to pay to any employee in St. Kitts and Nevis – by law – for a 40-hour work week will be $360.

“And I want to stress that this increase will not be subject to the Social Services Levy,” Dr. Douglas said.

He pointed out that all of the countries in region are well run and worthy of admiration.

“However, simply for purposes of comparison, you may be interested in knowing that the minimum that can be paid in Barbados is $338 per week; in Grenada, $240 per week; and in Dominica $162 per week; and so on,” said the Prime Minister, who also mentioned the role played by Minister Nisbett in formulating legislation and implementing the Long Service Gratuity Scheme, which will also benefit workers in Nevis.
.
“Minister Nisbett has played a pivotal role in ensuring that workers in St. Kitts and Nevis who decide to resign from their place of work after 10 years or more of service, will be entitled to a long service gratuity, paid for by our country’s Severance Payment Fund. Until now, someone who had worked with one employer for 10, 20, 30 years would receive no gratuity in the event they had to resign from that position. Today, as a result of Patrice Nisbett’s vision and commitment, that is no more. And the difference that this will make in the lives of those who have devoted (sometimes) decades of their lives to one employer will be tremendous indeed,” said Dr. Douglas.

“These are the types of changes and this is the type of impact that the Parliamentary Representative from St. Thomas and St. James, this legislator from Constituency 11, has been having on our country. And this type of impact, let us not forget, has ramifications not only for today or this year, but for generations to come,” said Prime Minister Douglas.

“Patrice Nisbett was absolutely pivotal to the successful implementation of the laptop programme here in Nevis. And let us not forget that via this programme it was not only the students, but it was also the homes in which those students live, which gained direct access to a computer and the constructive opportunities that this technology makes possible. The People’s Employment Programme, also, which has had such a major and positive impact in Nevis, is yet another example of how the dual commitment of Patrice Nisbett to both his island and his country has yielded tremendous, and life altering, advantages for the people of Nevis,” he said.

Prime Minister Douglas also highlighted, Minister Nisbett’s recent addressing the General Assembly of the United Nations where he articulated the views and the aspirations, the challenges and the priorities of the Federation of St. Kitts and Nevis.

“It was a glorious moment for me, as I know it was for us all. Thank you once again, Minister Nisbett, for your calm, far-thinking, wise and sober approach to governance, and for the steadfastness with which you have always attempted to serve the interests of your country, and the interests of Nevis, above all else,” said Prime Minister Douglas.