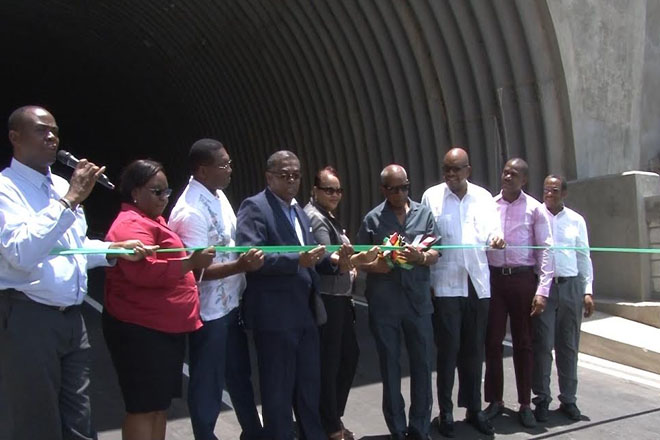 (ZIZ News) — The tunnel along the Sir Kennedy Simmonds Highway along the south east peninsula is now open.

The safety hazard posed by falling rocks along the Southeast Peninsular road will no longer be an issue.

Giving an overview of the project Managing Director of ADeB Consultants, Martell Lee said the aim was to build a tunnel that would stand the test of time.

“We have looked at the potential of a rock fall reoccurring over another 30 pr 40 years and so rather than creating a reoccurring cycle of problems and we have decided that we would fix this once and for all and we started analysing what material we can use to give us a hundred year life for this tunnel,” he said.

Addressing the gathering Minister of Infrastructure Hon. Ian Liburd said the construction of the tunnel ensures the safety of road users stating, “Opening this tunnel today is therefore about the protection and security of all those who travel on this southeast peninsula road. We have a better and safer road for the travelling public.”

Minister Liburd commended the vision of the Federation’s first Prime Minister the Rt. Hon. Sir Kennedy Simmonds in constructing the road over 25 years ago.

He said the advantages to be gained from the newly constructed tunnel fall in line with that vision.

“We will now create greater business opportunities on the southeast peninsula. There will be less wear and tear on your vehicles and more accessible St. Kitts road network. That I believe was your vision Sir Kennedy and I am honoured and humbled to be part of its fulfilment.”

Sir Kennedy Simmonds cut the ribbon signalling the official opening of the tunnel.

For several months the government worked with The National Association Of Heavy Equipment Operators (NAHEO) who constructed the road and tunnel.

According to the Minister of Infrastructure, the overall budget for the project was 35 million dollars.