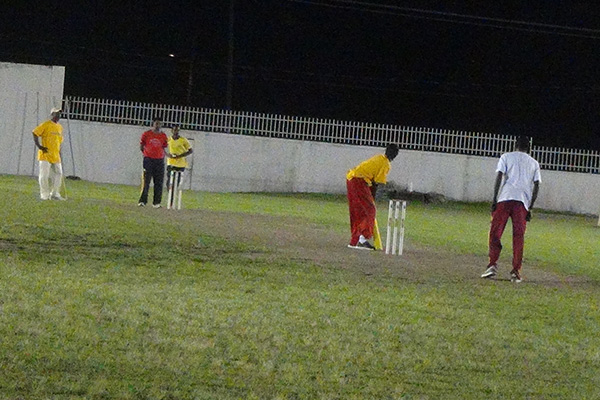 His name is GALDE and anyone who frequents the ET Willet Park would have seen a little fair skinned youngster playing Football with his friends, learning the game of Cricket or just generally being helpful and even sometimes doing the paces with the track clubs.

He was born in Nevis according to the cricket pundits to a mother who originates out of the friendly island of Santo Domingo.

So, having received his early upbringing just next to the Park, small wonder that it has became one of his favourite spots.

As the tape ball Cricket tournament hosted by the Nevis Sports Department and sponsored by the Development Bank of St.Kitts and Nevis continued on Monday night, the Young stars showed up with a few players short and when they needed an extra player, guess who volunteered?

The Rawlins Bush Wackers batted  first and piled up the runs on the youngsters comprising mainly of students from the Gingerland Secondary School team, ably led by under 19 youth cricketer, Irvawn Challenger.

The person who starred in the field was Galde.  He may not be the quickest athlete across the outfield but he often times got his entire body behind the ball and got the return in very quickly, much to the applause of the sprinkling of spectators on hand.. However, he drew even more applause when he strode to the crease in the final over when his team batted.  His first ball was a high full toss which he totally ignored; his second was a qucikish delivery from Leslie Huggins which he took on the body but the third delivery he absolutely smashed through the covers to the loud shouts and cheers of the spectators and picked up 2 runs.

West Huggins 3 for 6; Leslie Huggins and Tevin Nisbett 1 wicket each

In the first match of the evening, it was a walk in the Park for the SDA Jets versus Easterns.