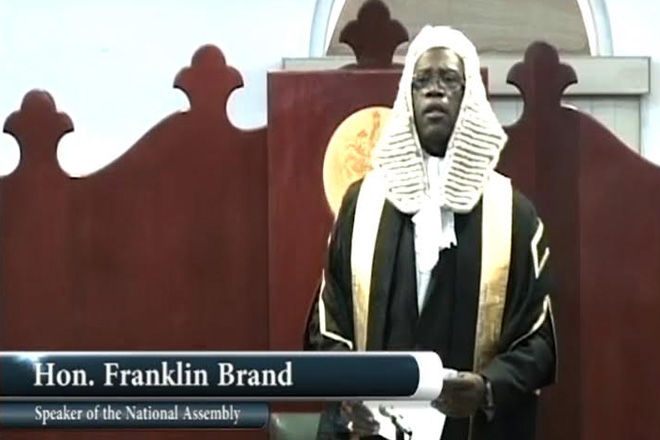 Speaker of the House Resigns

The Federal Cabinet has today announced with regret that the Hon Franklin R. O. Brand, Speaker of the National Assembly, has resigned his post due to health reasons.

It was noted by a Cabinet spokesperson that Mr Brand had been facing health challenges for some time, which resulted in the proceedings of the National Assembly being chaired for some time by the Deputy Speaker, Hon Senator Michael Perkins.

Commenting on the departure of Speaker Brand, Prime Minister Dr the Hon Timothy Harris indicated that the Speaker’s loss will be impactful:

“History will record that it was the Hon Franklin Brand who brought decorum, order, dignity and democracy back to our Parliament,” Prime Minister Harris said.

Prime Minister Harris noted that there has been a vast improvement in the conduct of our National Parliament compared to what was a poor excuse for Parliament under the previous Administration:

‘‘One can recall that the previous Denzil Douglas-led regime brought our Parliament into disrepute, thereby making it the laughing stock of CARICOM. This, as we all know, resulted in our sinking to the lowest ebb in our history with the travesty that took place on January 16, 2015 regarding the hastily convened Parliament, simply to approve last-minute boundary changes in order to gain an electoral advantage for an incumbent Government that had fallen out of favour with the electorate of this Country.’’

It was noted by Cabinet that the election of a new Speaker will take place at the next sitting of the National Assembly. The Cabinet extends best wishes to the outgoing Speaker Mr Brand for a full recovery, and thanked him for his services to the Nation.