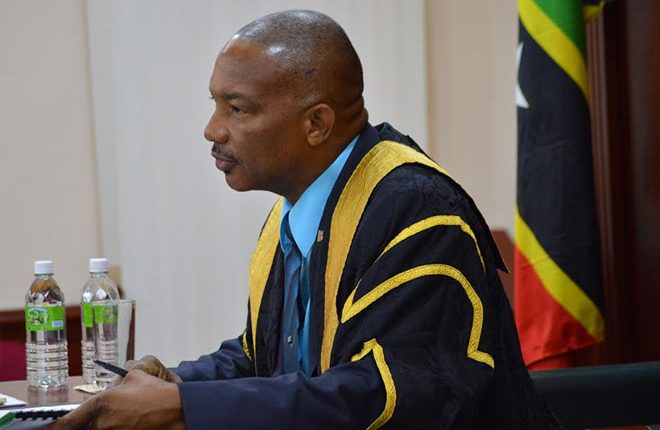 (Press Unit in the Office of the Prime Minister) – The decision taken by the Government of National Unity to allow the Leader of the Opposition the privilege to nominate the chair of the Public Accounts Committee is being welcomed by the Speaker of the National Assembly, the Honourable A. Michael Perkins, as a “transparent move” in the observance of “good governance.”

Speaking with the Press Unit in the Office of the Prime Minister earlier today, Wednesday, May 24th, 2017, the Honourable Perkins noted that this move is also in line with best regional practices.

“Traditionally, that’s the way it’s been done throughout the Caribbean region. All the cases we have researched would show that the Leader of the Opposition in that [respective] country chaired the Public Accounts Committee,” the Honourable Speaker added.

During the Tuesday, May23rd, 2017 sitting of the National Assembly, Prime Minister Harris disclosed that he had written to the Leader of the Opposition, requesting that he propose two nominees to be part of a five-member Public Accounts Committee.

The Prime Minister of St. Kitts and Nevis added, “The Government has already nominated three members. We therefore await the nomination from the Opposition, one of whom will be the Chairperson of this committee.”

The Honourable Perkins noted that the Standing Orders of Parliament under section 70, which form part of the National Assembly Act, stipulate that there shall be a Public Accounts Committee.

Speaker Perkins went further and explained that at least three Public Accounts Committees were formed in St. Kitts and Nevis since the Federal Elections in the year 200, but “none of these committees seemed to have functioned at all, meaning there are no records of meetings held, no reports ever coming to Parliament.”

The Honourable Speaker continued: “Although the committees were constituted, there were no guidelines as to how they should function, no regulations, no procedures and I believe that was the root of the problem, and so what we are hoping to do now is to have that committee established.”

Honourable Perkins added, “The executive intends to bring new legislation, which would deal with all the regulations on how the committee should function.”

Prime Minister Harris said that – once Cabinet receives the nominations from the Leader of the Opposition – he will, as the Minister of Finance, “bring the appropriate resolution to the National Assembly for the approval of the Assembly.”

The Standing Orders of Parliament state that the duties and powers of the Public Accounts Committee, drawn from both sides of the lawmaking body are to; (a) ascertain that the authorised expenditure during each financial year, including supplementary expenditure, has been applied to the purposes prescribed by the National Assembly; (b) scrutinise the causes which may have led to any excess over authorised expenditure and to verify applications of savings on other authorised items of expenditure; (c) make an effective examination of public accounts kept in any Department of Government and (d) summon any public officer to give any information or any explanation or to produce any records or documents which the Committee considers necessary in the performance of its duties.