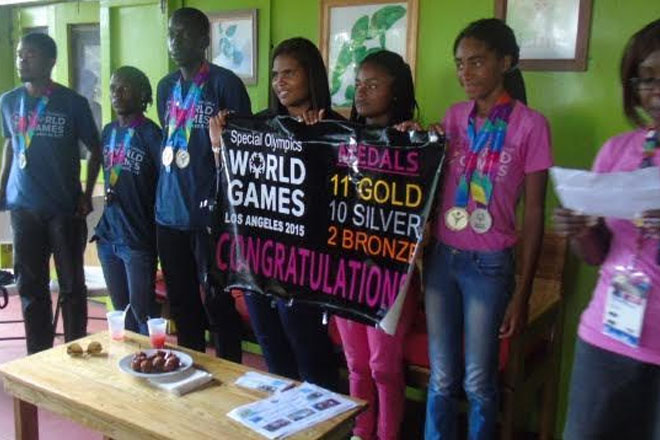 Sports Page — The Nevis contingent of the Special Olympics team that represented St. Kitts and Nevis at the recently concluded world games, was celebrated in a big way on Friday 14th August.

The athletes were the main focus of a motorcade which commenced at the Reliable Motors area, drove through Main Street, Charlestown, down the Samuel Hunkins Drive and culminated at the LIME beach bar.

A brief ceremony was held at LIME.

Pastor Cecelee Browne delivered the invocation and Shoya Lawrence chaired the proceedings and indicated in her opening remarks that the athletes would have helped persons to focus on what they can do and not what they cannot do.

Supervisor at the Cecelee Browne Integrated School, Violet Clarke, allowed the athletes to introduce themselves as follows:

Leon Silcot (absent) — Gold in the Tennis singles tournament and a Silver.

Permanent Secretary in the Ministry of Social Development, Mr. Keith Glasgow in delivering brief remarks pointed out that the special Olympians can compete in world games just like other athletes. ‘It is really phenomenal,’ he stated.

He commended the St. Kitts-Nevis team for bringing back some twenty-three medals.

He gave congratulations on behalf of the Ministry of Sports and the Nevis Island Administration.

He saluted the efforts of his two coaches in Denzil Parris and Shefton Daniel.

He also saluted the efforts of the support crew which included family members; teachers and coaches.

Head of the delegation, Mr. Ivor Blake also addressed the audience. He stated that the games happen every four years and that this year, there were 165 participating countries.

He also named the Kittitian coaches and athletes for special recognition.

The vote of thanks was delivered by Mrs. Violet Clare who among all of the numerous persons and businesses to be thanked, had special words of commendation for youthful entrepeuneur, Randy Jeffers who graciously accommodated the athletes and their entourage to fruit punch and finger foods.