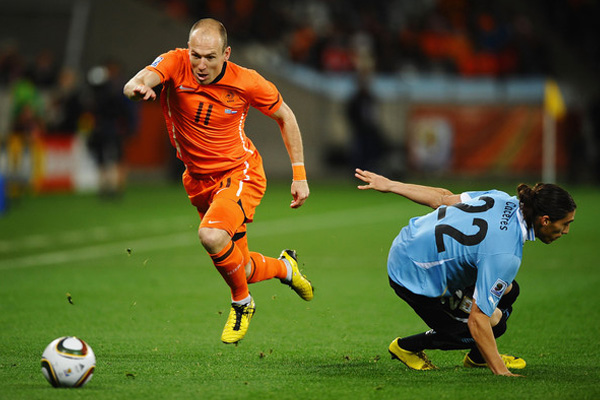 FORTALEZA, Brazil (AP) — Arjen Robben just seems to get quicker and quicker. The 30-year-old Bayern Munich winger has out-sprinted every defender he has faced at the World Cup so far and is scoring goals, too.

It is a far cry from the final four years ago, when he couldn’t find the net and possibly win the tournament for the Netherlands.

Robben seemed doomed to be remembered at World Cups for the second-half chance he squandered against Spain in the final in Johannesburg, when Iker Casillas stuck out a boot and deflected his shot away from goal with the score still 0-0.

The Bayern Munich forward still gets asked about that miss, but he has silenced critics at this World Cup with three goals in as many matches and a perfect assist to set up the team’s second goal against Chile as the Dutch topped Group B with three straight wins, scoring 10 goals in the process.

“I think Arjen has done a great job so far and at the moment I wouldn’t change him with any other player in the tournament,” said Dirk Kuyt as the Dutch prepared for Sunday’s round of 16 clash with Mexico in Fortaleza. “He’s scored great goals … hopefully he can give this performance until the end.”

Robben is one of the old guard in the Dutch team — along with strike partner Robin van Persie, he’s scored at three successive World Cups — and he has earned the respect of the youngsters snapping at his heels to get into the starting line-up.

“Robben is fantastic,” said Memphis Depay. “It’s fantastic to train with him every day. I can’t believe my eyes what he can do with the ball. It’s unbelievable how fast he is with the ball. He’s a great player.”

In the Netherlands’ final group match against Chile, he had to sprint toward goal as Robben set off on a lightning-fast counterattack down the left wing. The 20-year-old PSV Eindhoven striker managed to catch up with him — just — and was on hand at the far post to tap in an inch-perfect cross.

Robben had been on the pitch more than 90 minutes at the time of his dash, Depay was a second-half substitute.

“I think Robben is one of the fastest players in the world with the ball and without,” Depay said.

Depay said he wasn’t sure who would win a race between the two Dutch forwards.

“I don’t know who’s fastest. I think maybe he is,” he conceded.

Robben appears to be benefiting in Brazil from his seniority.

Between matches, he sometimes works out only lightly, apparently resting up for the supreme effort he puts in during games. His coach, Louis van Gaal, knows Robben from their time together at Bayern Munich and allows the star a little leeway, while he pushes most of his other players on the training ground.

Unlike four years ago in South Africa, when Robben was injured in the Netherlands’ final warm-up match before the tournament, Robben arrived in Brazil in the best shape of his life and coming off two great seasons for Bayern Munich.

He went a long way to dispelling the tag of a big game loser when he set up one goal and scored the winner for Bayern in the Champions League final a year ago.

Now he wants to reach another final in Brazil.

“We’ve put ourselves in this good position, now we have to make the most of it,” Robben told Dutch daily De Telegraaf. “Basically it’s simple. Three wins and you’re in the World Cup final.”

Scoring a goal to finally deliver the Netherlands a World Cup title would be the ultimate redemption for Robben.