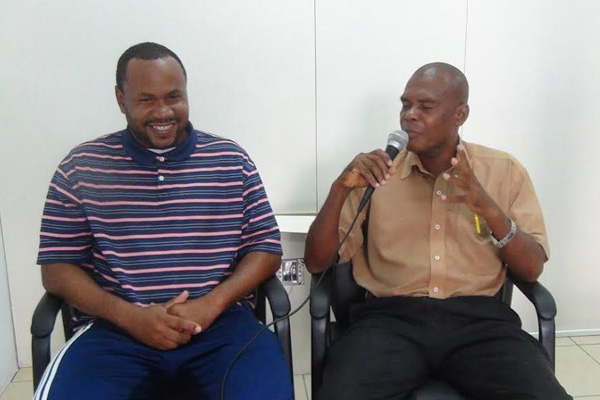 (Sports Page)— Ag. Director of Sports on Nevis, Jamir Claxton indicated on Tuesday 27th May that the programs that have been implemented by his department, are reaping rewards.

This he stated as he pointed to the fact that four young ladies who are a part of the Female Football program on Nevis, are currently overseas representing the St.Kitts and Nevis team in the CFU tournament.

Claxton noted that the local program includes students from the Primary schools and Secondary Schools on the island. There are also several players who have already left school in the program as well. Those who are just learning the basics of the game are assisted by the senior girls and those who are more advanced are coached by him.

He is confident that based on the skills that he has seen, that more of the young ladies will be in contention for national selection in the not too distant future.

Claxton is also very pleased with the results of the grassroots program which caters to the top footballers coming out of the Primary School championship.

A squad of 42 of the best players was assembled for constant training. This squad was reduced to 25 and now the Department has accepted an offer from the BVI Football Federation for a team from Nevis to participate in a tournament for under 13 Footballers, scheduled for August in the BVI.

Other teams expected to be a part of the tournament are: St.Maarten; USVI and host BVI.

Claxton noted that the squad will be eventually cut to 18 who will travel to the tournament along with four officials.

He was pleased to inform that the parents of the children are leading out in the fund raising endeavours which involve a cost of approximately $850.00 EC per child for airfare. The host territory will assist with meals and accommodation.

He is also confident that the Nevis team will be one of the top teams in the tournament.