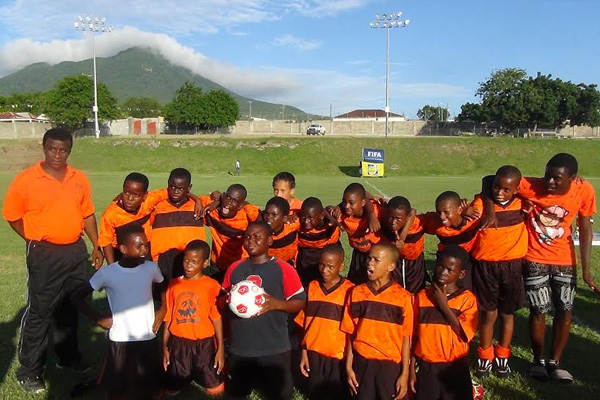 St. James’ seals date with History and CPS does it again

(Sports Page)— The crowd built up to a significant multitude during the course of the afternoon and the atmosphere was simply ‘electric.’

Football fans across the island had turned out in their numbers for the finals in the Giant Malt Primary School Football competition.

The action was at the ET Willet Park and commenced with the B division finals with the St. James’ Primary showing some early nerves as first timers to the big stage, as they came up against the more seasoned St. Thomas’ team.

However, the St. James’ team got an early break through and finished with a thrilling goal and their support crew went wild.

The St. Thomas’ coaches rallied their troops and gave it their all, but a blunder in the second half allowed another St. James’ player to tap another one into the back of the net.

As the minutes ticked away, they knew that they had done the improbable. They had convincingly won the B division championship for 2014

The goal scorers were: Tyri Jeffers and Stalius Baker.

The atmosphere increased in momentum as the A division clash between Charlestown Primary and defending champions Ivor Walters Primary took place.

About ten minutes into the first half, a defensive error by the CPS team, allowed a run through by one of the IWPS strikers and he bombed home a sizzler. The shouts could have been heard all the way to down town Charlestown!

However, CPS came back and came back quickly, as one of the IWPS players touched the ball with his hand in the box and Referee Malcolm Ramsey duly awarded a penalty which was deftly struck home, much to the joy of the CPS supporters.

Their cheers may have been heard in Brown Hill!

The regular time ended with the score line 1 goal- all and the game went into overtime. The first five minutes did not see any changes in the score but with about a minute to go in the final five minutes of extra time, there was a defensive blunder on the part of the IWPS team and the exciting young Dorset pounced on it and the CPS support crew went wild.

Charlestown Primary is therefore the 2014 A division champions.

The goal scorers were: