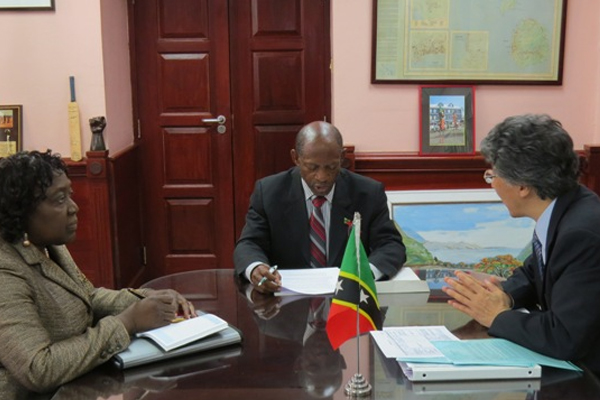 Basseterre, St. Kitts (CUOPM) – St. Kitts and Nevis and Japan hope to strengthen their bi-lateral relationship during the tenure of the new Ambassador accredited to the twin-island Federation, His Excellency Yoshimasa Tezuka.

During a courtesy call, Prime Minister of St. Kitts and Nevis, The Rt. Hon. Dr. Denzil L. Douglas in welcoming the Japanese diplomat, congratulated him on his appointment and emphasized the long, strong friendship that St. Kitts and Nevis has had with Japan and was assured that at the end of Mr. Tezuka’s tenure, it will be crowned with success.

Prime Minister Douglas briefed the Japanese diplomat on the efforts being made by his St. Kitts-Nevis Labour Government to transform the local economy following the closure of centuries-old sugar industry in St. Kitts, which has been replaced by non-sugar agriculture including fishing; tourism and hospitality services, financial services and off-shore educational services. He also mentioned a critical area of interest- Training (leadership in public service management – ongoing grassroots project) and the continuation of the “Young diplomats Programme.”

Ambassador Tezuka thanked Prime Minister Douglas for his words of welcome and said he looked forward to the deepening of the relationship between St. Kitts and Nevis and Japan.

The Japanese diplomat highlighted Japan’s continued assistance within CARICOM in the areas of fisheries and climate change.

The construction of the Japan-funded fisheries terminal for Nevis was discussed. On the issue of climate change, Prime Minister Douglas pointed out that there is a large amount of funds that haven’t been unlocked for Climate Change, especially as it relates to Small Island Developing States (SIDS) and sought Japan’s support in seeking assistance for the vulnerability and high debt of SIDS.