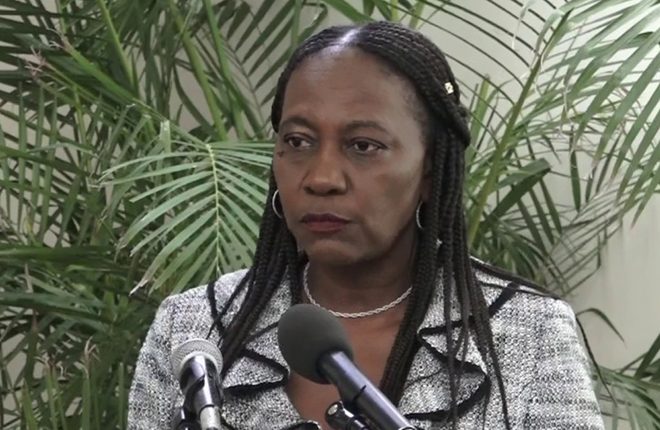 Basseterre, St. Kitts, July 02, 2018 (SKNIS): The Government of St. Kitts and Nevis in partnership with the Republic of China (Taiwan) recently engaged in a brief but meaningful signing ceremony for the Land Administration Information System Project (LAIS), a system aimed at propelling the Federation from the analog era to the digital age in so far as land administration is concerned.

Acting Permanent Secretary in the Ministry of Justice and Legal Affairs and Communications, Dianna Francis, explained that the agreement entered into by both countries signals their ongoing and strengthened relationship, while at the same time underscores the importance of the project.

“This system will be an active user-friendly portal for all to conduct searches on properties, and to engage in various types of business activities with the Land Registry. The Land Administration Information System will be built by Taiwanese personnel, who will be in the Federation shortly to conduct the feasibility study to ensure that the relevant information is captured so as to facilitate the building of a system that meets the needs of various stakeholders,” said the acting permanent secretary.

Ms. Francis stated that once the system is operational, it would significantly improve the “whole aspect of land acquisition from the point of sale to acquisition of title, filing etc. and not to overstate, the ease of conducting searches”.

“The importance of this venture is key to sustain the current thrust of the Federation in expansion, development and re-development of the CBI Programme as a world provider of Bespoke Investments in land and real estate. These efforts will not only continue to increase government’s revenue through tax collection, but also promote the development of the tourism industry,” said the acting permanent secretary, adding that the Government of St. Kitts and Nevis is working assiduously to “significantly improve the way business is done in the public service through the efficiency, effectiveness, the turnaround time and the time spent rummaging through physical records”.

She noted that the digitization of records will play an integral role for the Land Registry, adding that digitizing the functions of the Land Registry will aid in the administrative flow and integration between departmental business processes.

“Upon realization and completion of this project stemming from the outgoing relations between the Republic of China (Taiwan) and St. Kitts and Nevis, the current paper records would be digitized into electronic formats, thereby making it possible for practitioners in the field and the general public to have direct and remote access to information stored in the repository at a minimal cost,” said Ms. Francis. Additionally, the new system would see the establishment of a secure preservation of records and secure storage and backing up of records, thus minimizing the use of the fragile folio books that are currently in use.”