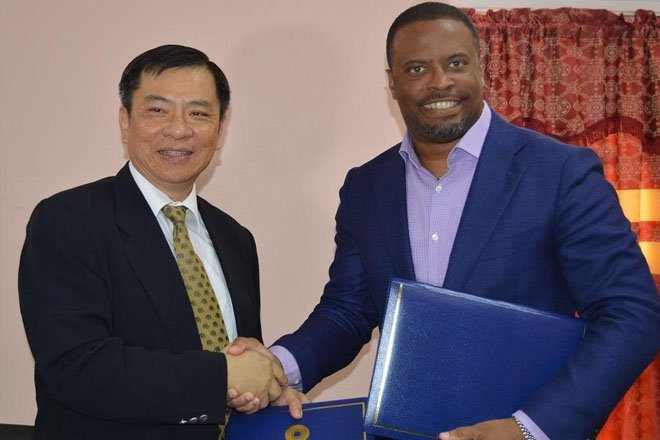 (SKNIS): The Government of St. Kitts and Nevis and the Government of the Republic of China (Taiwan) have strengthened their long standing diplomatic ties with the signing of an Agreement of Bilateral Cooperation on Friday June 10, 2016.

He explained that “this agreement will fortify the relations of the Republic of China on Taiwan and the Federation of St Kitts and Nevis.”

The Resident Ambassador explained that according to the agreement, Taiwan will provide monetary grants to the Federation annually for a period of four years, adding that after that four year period, the agreement may be extended “according to a consensus of both countries.”

Speaking to the relationship between the two countries, His Excellency Gow Wei Chiou said that it is his hope that the relationship will be enhanced to the benefit of the people of both nations.

Speaking at the signing ceremony, Deputy Premier of Nevis and Minister of Foreign Affairs, the Honourable Mark Brantley, said that “St. Kitts and Nevis and the Republic of China on Taiwan have developed a relationship “built on a strong foundation.”

According to Minister Brantley, that relationship has been forged on “shared interest, mutual respect and democracy, and the rule of law.”

The agreement, he said, “demonstrates the important position of St Kitts and Nevis in the diplomatic architecture of the Republic of China on Taiwan.”

The foreign affairs minister further said that the agreement serves as representation of “a formalizing of the long standing and dynamic collaboration in advancing the national development agenda.”

Expressing sincere gratitude on behalf of the Government and people of St Kitts and Nevis, Deputy Premier Brantley said the timing of the agreement is also significant as it comes on the heels of the inauguration of a new government in Taiwan.

“This instrument to my mind symbolizes a renewed commitment, a new stage of simultaneous development in bilateral cooperation with the Government of Taiwan,” said the minister, adding that it provides an opportunity for St. Kitts and Nevis and the Republic of China (Taiwan) “to propel our fraternal relations to a higher level.”