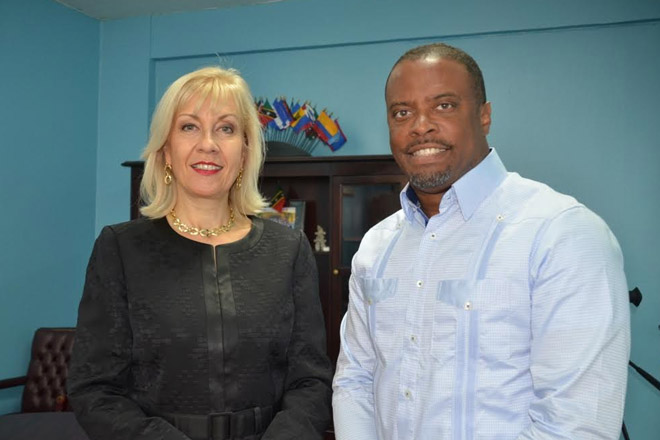 (SKNIS): The Honourable Mark Brantley, Minister of Foreign Affairs in the Federal Government, engaged Her Excellency (H.E.) Mrs. Line Marie Leon-Pernet, Ambassador of Switzerland, in a brief but meaningful discussion, as she bid farewell to the Federation.

“During her tenure I believe we became great friends and we were able to advance, in a very meaningful way, the relationship between Switzerland and St. Kitts and Nevis,” said the Foreign Minister.

Minister Brantley recalled a number of benefits that the Federation enjoyed from this relationship.

“I am particularly happy that through her assistance we have had scholarships offered to Switzerland for post-graduate work,” said Minister Brantley. “We have had and are investigating [the possibility of] our athletes being able to go there, at a very top-notch centre that they have there. We hope that this will come to fruition later this year and we are always exploring the possibility of establishing a full-fledged mission in Geneva, again with her assistance and her guidance,” he added.

The Minister stated that H.E. Leon-Pernet has done a great deal to deepen the relationship between the two countries and he believes that St. Kitts and Nevis and Switzerland have become much friendlier as a direct result of her efforts.

The Ambassador described her time serving the Federation as a wonderful experience. She expressed thanks to the Government and people of St. Kitts and Nevis for their friendliness and for the support they have showed her over the years.

“I also want to congratulate the Government on the Diplomatic Week they did earlier this year,” said Ambassador Leon-Pernet, referring to the event that was held under the auspices of the Ministry of Foreign Affairs between April 03 and 08. “It has been very enlightening and it has been an opportunity to find out more about the country.”

Minister Brantley used the opportunity to extend best wishes to the Ambassador in her future endeavours and added that he hopes the relationship that she has fostered between the two nations will continue to flourish.

Diplomatic relations were established between St. Kitts and Nevis and Switzerland on November 17, 1992.

In 1997, St. Kitts and Nevis established an Honourary Consulate in Geneva with Mr. Steven Goldstein as the Honorary Consul. In 2011, the Federation of St. Kitts and Nevis and Switzerland signed a mutual visa-waiver agreement to enable their nationals who hold valid passports to enter and stay for up to 90 days in each other’s country.

On this farewell visit, Ambassador Leon-Pernet also paid a courtesy call on the Governor General, His Excellency Sir. S. W. Tapley Seaton. The Ambassador is scheduled to leave her post in the Caribbean when her four-year term ends in October of this year.