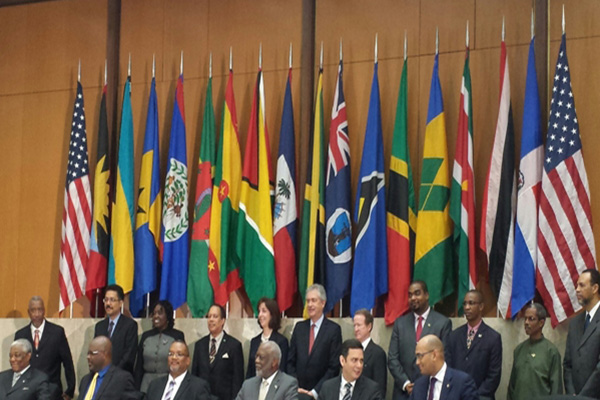 Basseterre, St. Kitts (CUOPM) – Top level security officials from St. Kitts and Nevis were among officials from CARICOM Member States, the Dominican Republic and the United States of America meeting to discuss matters pertaining to the existing cooperation on security between both Caribbean and the US.

“Towards a More Effective Partnership.”

The interactive sessions allowed for discussions on the three main goals of security cooperation, namely 1. To Substantially Reduce illicit trafficking ; 2. To advance public safety and 3. To promote social justice.

These overarching goals dominated the High Level Dialogue as partners use the one day annual meeting to craft “a more effective partnership” which will inform continued security operations, especially for 2014.

Serious consideration was also given to the incorporation of the multiple strategic goals of the newly-approved CARICOM Crime and Security Strategy (CCSS), the framework for regional security cooperation.

In addressing initiatives to reduce illicit trafficking, much emphasis was placed on integrating networks and adopting maritime and airspace control strategies.

The security officials placed sharp focus on the utilization of information sharing mechanisms, justice sector reform and capacity building of law enforcement, which have been viewed as essential to advancing public safety.

The partners in this collaborative initiative focused on the accomplishments achieved in their pursuit to implement the main goals and objectives to date and also explored avenues for a more effective partnership in enhancing the safety and security of the Region.

St. Kitts and Nevis spoke of its various crime prevention and detection strategies and the capacity building efforts that are implemented under the CBSI.

The delegation of St. Kitts and Nevis was led by Her Excellency Ambassador Astona Browne, Permanent Secretary and co-chair of the Caribbean side of the CBSI Commission.

Other members of the delegation were Her Excellency  Jacinth Henry-Martin, Ambassador to the United States and Security Chiefs, Lt. Colonel Patrick Wallace, Commander of the St. Kitts and Nevis) and Mr. Celvin Walwyn, Commissioner of Police.