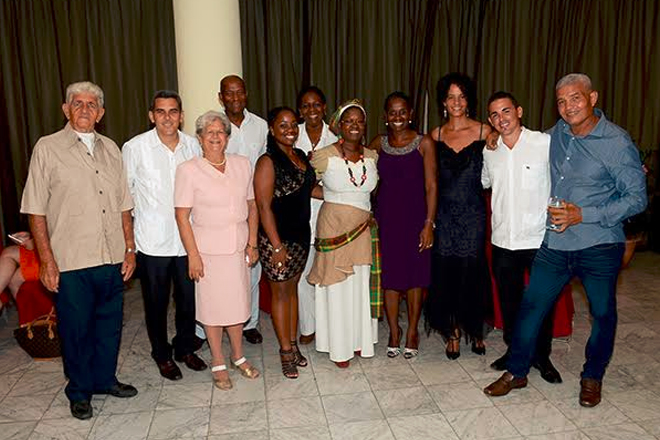 Mrs. Morris-Mills made brief remarks at the Reception. Firstly, the Federation’s diplomat in Cuba thanked the representatives from the different Government Ministries for their celebrating the anniversary of the independence of Saint Kitts and Nevis by attending the event. Highlighting the theme for this year’s Independence, “Promoting Prosperity through Sustainability and National Unity”, Ms. Morris-Mills explained that the theme gave an insight to the object and purpose of our nation’s development strategy for its people. She stated that it was certainly possible to build a better nation for our children and our children’s children. Hence, as a country that is deeply rooted in a system of values and principles, the Government of St. Kitts and Nevis are determined and committed to invest more in the welfare and well-being of the people- our most valuable capital.

Mrs. Morris-Mills also placed emphasis on the relationship between the Federation of St. Kitts and Nevis and Cuba. She declared “for 21 years, St. Kitts and Nevis and Cuba have maintained strong ties and relations. We truly value our friendship and collaboration with Cuba, and I hope we can continue to strengthen these ties even more in the coming years”. She specifically mentioned cooperation between our two countries in the areas of public health, education, agriculture. She continued, “Today, we have 43 students in Cuban universities receiving professional training, mostly in the medical career. I am confident therefore, that the St. Kitts Nevis-Cuba relationship and the CARICOM-Cuba relationship will continue to blossom and bear many more fruits of cooperation in the future”.

The Chargé d’affaires expressed “appreciation for the countless blessings the Almighty God has bestowed upon the Federation; and the need for the investment of more time and effort in the quest for peace, love and harmony as we continue along the path of nation building.”

The Celebrations in Cuba also involved a day excursion at Las Terrazas on the outskirts of Havana on Saturday, 17th September, 2016. St Kitts and Nevis nationals pursuing studies in Cuba. They received a guided tour and also visited the UNESCO Biosphere Reserve. Additionally, on Sunday, 18th September members of staff of the Embassy, students and the CARICOM diplomatic corps participated in the thanksgiving service which was held at the Episcopal Cathedral of the Holy Trinity. Mrs Morris-Mills also delivered brief remarks at that event.