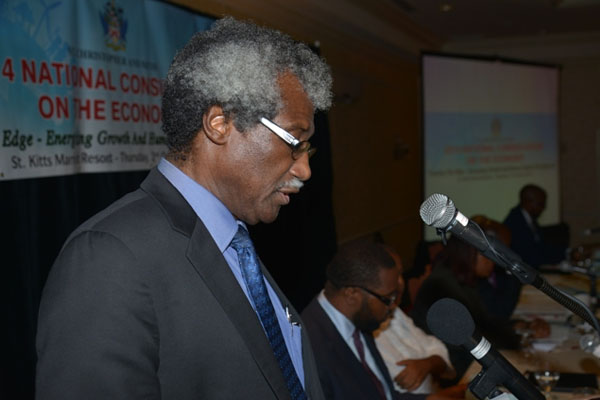 St. Kitts and Nevis economy a bright spot in the ECCU

Basseterre, St. Kitts (CUOPM) — The performance of the economy of St. Kitts and Nevis since 2013 has been very encouraging and has been the bright spot in the Eastern Caribbean Currency Union (ECCU) as the sub region continues to be
affected by the global crisis.

Addressing the 17th Annual National Consultation on the Economy, Governor of the Eastern Caribbean Central Bank (ECCB) disclosed that St. Kitts and Nevis economy is performing better than the other member countries in the ECCU and has successfully executed the first five of an 8-point programme.

“This performance has been due to an effective implementation of a robust adjustment programme conceived by the government within the guidelines of the Eight Point Stabilization and Growth Programme and assisted by the International Monetary Fund (IMF) with financing and monitoring,” Governor of the Eastern Caribbean Central Bank (ECCB), Sir K. Dwight Venner said.

Governor Venner said the performance by St. Kitts and Nevis is indicative of what is possible if the conduct of the economic policies is carried out within the conceptual framework of a broad macroeconomic framework which addresses not only adjustment, but also a growth stimulus and social safety nets which address those who are least capable of defending themselves in difficult circumstances, and preparing them where possible for gainful employment in the economy.

“The other element which has made the recovery positive has been the Citizens by Investment Programme, which has brought in much needed foreign exchange from which the government could embark on an effective stimulus programme and finance the social safety nets. This programme is now being emulated by other members of the Currency Union and we hope that it can bring them similar benefits,” the Central Bank Governor said.

Mr. Venner pointed out that economic growth in the Federation turned positive in 2013 after a contraction which started in 2009 and is projected to be about 3 percent and possibly over this up to 2017 in the first instance.

“The challenge facing the country now would be the sustainability of this performance in the current environment of an increasing competitive international economy, in which no quarter is given and none is asked for,” said Sir Dwight.

He said the evolving environment is evidenced by the following the removal of concessional trade arrangements which have resulted and caused the demise of the two major agricultural export commodities in the ECCU, sugar and bananas; the difficulties the countries have had in trying to create viable international financial sectors; the experience of Antigua and Barbuda with their online gambling industry in which they won their case at the WTO, but could not get the judgement against the United States implemented and the current challenges to the Citizenship by Investment Programme which is coming from several quarters even from countries which had these programmes for years.

“There is also the issue of the need to urgently improve our productivity and international competitiveness in the areas that we intend to make a living from. This crisis and its aftermath gives us the opportunity to chart a new course which will ensure an increased standard of living and quality of life for our citizens if we chart a strategic and focused path to our goals,” said Sir Dwight.

He said that the fundamental issue would be achieving sustainable growth over an extended
period of time to achieve a doubling of per capita incomes by the year 2030; the reduction of unemployment to below 4 percent; substantial reduction and possible eradication of poverty; improvement in the Human Development Indices of the United Nations; attaining and surpassing the Millennium Development Goals and a diversified and competitive economy.

“This will require a growth rate of three percent consequent upon a phase of adjustment which the Federation has already achieved, moving to 5 to 7 percent from about 2017 and onwards. To be realistic about achieving these goals we must be realistic about our circumstances and the external environment,” said the ECCB Governor.

He said there are factors outside of their control which must seek to treat with through resilience
and flexibility.

“However, the factors that are within our purview we must ensure that we do them with excellence and to the best of our abilities. In the context of the factors which we must contend with in our quest for development, there are three which are of great significance. They come under the headings of fundamental structural issues, institutional issues, binding resource constraints and fundamental structural issues would include, small size, openness, vulnerability, seasonality, cyclical impact of the business cycles of our main trading partners, institutional issues would cover constitutional and political regimes, socioeconomic environment, policy framework and architecture and administrative and technical capacity.

“Resource constraints would involve an inventory of our actual and potential human and physical resources, the supply factors which must be placed alongside the demand for goods and services. This would give us an idea of whether we could satisfy our wants from our resources. This is a particularly critical assessment for small states such as ours situated as we are close to the most developed mass consumption society in the world. This also poses challenges for our competitive multiparty systems as it is sometimes difficult to manage the expectations of our fairly modern polities and societies which at the same time have not yet reached to an advanced stage of economic development,” said Mr. Venner.