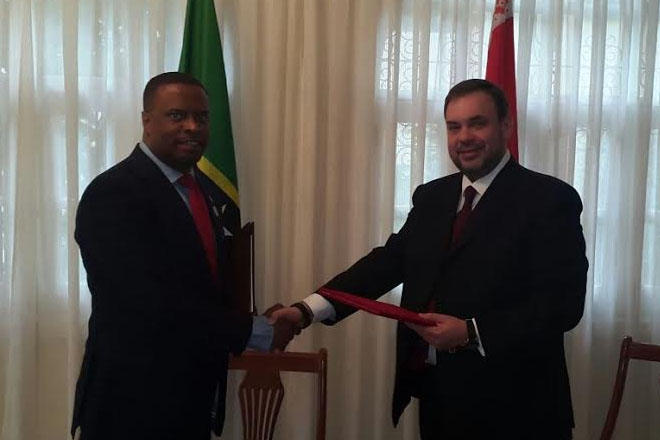 St. Kitts and Nevis establishes diplomatic relations with the Republic of Belarus

(Ministry of Foreign Affairs) — St. Kitts and Nevis on Saturday 4th June, 2016, formalized diplomatic relations with the Republic of Belarus, signaling the official completion of a process that began in 2004.

Both Foreign Ministers confidently expressed their satisfaction at the establishment of diplomatic relations that will contribute to the mutual development of trade, social, economic, cultural and other ties.

In his exchange with Deputy Minister Shestakov, Foreign Minister Brantley remarked, “On behalf of the Government of St. Kitts and Nevis, I am indeed very delighted to sign this communiqué, which will not only serve to expand the Federation’s diplomatic footprint across the globe, but this signing symbolizes the deepening of the fraternal relationship that exists between our countries, which would only serve to facilitate mutual cooperation in many spheres, for the benefit of all our people.”

Deputy Foreign Minister Shestakov thanked Minister Brantley for facilitating the establishment of diplomatic ties at this time, noting that the Government of Belarus has long had an interest in strengthening its ties with St. Kitts and Nevis.