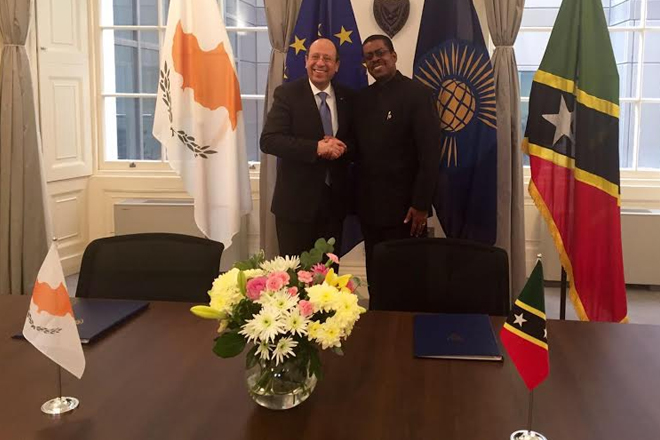 St. Kitts and Nevis formalises relations with the Republic of Cyprus

As Commonwealth countries, St. Kitts and Nevis and Cyprus are natural partners in championing the cause of small island countries, in the international arena. This much was acknowledged by the Cypriot representative in his brief remarks in which he lauded the significant step of officialising relations, by noting the anomaly of having not taken the important step sooner. With official diplomatic ties in place, both High Commissioners pledged to continue working together under the aegis of the Commonwealth and the United Nations to advance the global agenda and to work bilaterally to build awareness and share experiences.

A sentiment shared by both Heads of Mission was that the size of one’s country ought not to determine its influence and role internationally. High Commissioner Isaac underscored that it is the intention of the Government of St. Kitts and Nevis to continue to enlarge its diplomatic footprint so that it can continue to play a constructive and positive role globally in partnership with like-minded states.

The ceremony was attended by a wide range of officials including the Secretary-General of the Commonwealth Secretariat Kamalesh Sharma and his successor Baroness Patricia Scotland, Higher Commissioners from Caribbean Community including Jamaica, Grenada, Dominica and St. Vincent and the Grenadines and the High Commissioners from Ghana, Cameroon and Malta, the United Kingdom Envoy to the Commonwealth Secretariat, as well as Members of Parliament from the UK Parliament.