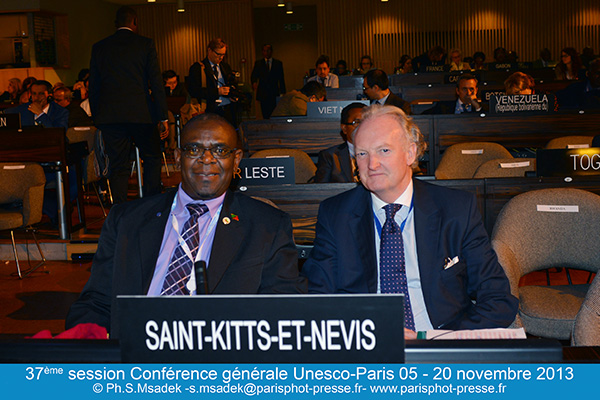 St. Kitts and Nevis gains a seat on the UNECSO Executive Board for second time in a decade

NATCOM (SKN) – The Federation of St. Christopher and Nevis has been elected to UNESCO’s Executive Board for the second time in ten years.

The Federation was elected by Member States to the leading UNESCO decision making body at the sitting of the 37th UNESCO General Conference in Paris France on Wednesday November 13th.

Secretary General of the National Commission for UNESCO Mr. Antonio Maynard says this is significant as it can be counted as another significant milestone as the Federation celebrates its30th anniversary of Independence this year. He added that St. Kitts- Nevis is now poised to occupy a seat on one of the three constitutional organs of UNESCO, which examine the programme of work for the Organization and corresponding budget proposals.  Each comprises 58 member states, with four-year terms of office.

St. Kitts- Nevis will have an integral role in shaping the post 2015 development agenda over the period.

According to Mr. Maynard one of the highlights of the General conference was the re-election of Irina Bokova as Director General of UNESCO: a strong supporter of the cause of Small Island Developing States (SIDS). Her first term was marked by the major reform of UNESCO to make it more efficient in addressing challenges facing peace and development today.

Ambassador Doyle stated that  “St. Kitts-Nevis’ accession to the Executive Board is timely given the immensity of the challenges facing SIDS such as St. Kitts-Nevis including climate change, vocational education, preserving terrestrial and underwater culture heritage and the re-emergence of the need to raise historic and educational profile of St Kitts-Nevis’ slavery legacy.”

Delegates stated that the conference has proven active so far for the St. Kitts-Nevis delegation. Youth Ambassador Desi Browne represented the Federation at the 7th youth summit preceding the Conference. Ambassador Doyle lead a delegation to  meet the Director General to present a draft resolution signed by over 30 member states to inspire the strengthening of UNESCO activities in favour of SIDS members.

The resolution co-authored by New Zealand (on behalf of Pacific Islands) and St. Kitts and Nevis called for a prioritization of UNESCO work to cover critical areas such as tangible and intangible cultural heritage, climate change adaptation and mitigation, early-warning systems of impending natural disasters, education for sustainable development and building knowledge societies.

“SIDS was a central theme in St. Kitts-Nevis’ interventions at the Conference,” Dr. Doyle commented, “We were very aware that we had a role to play in galvanizing the SIDS constituency, representing some 20% of the UN Membership, to call for a common voice on UNESCO input and priority setting at the Third International Conference on SIDS to be held in Samoa in September 2014.” Climate change and youth issues were identified as critical.

The St Kitts Nevis Delegation underlined the fact that the Government of the Federation believes that no real economic and social development is possible without a solid foundation in Education as such holds quality Education at all levels and in all fields as a priority. Special mention was made of Technical and Vocational Education which has been flagged as requiring special focus as the development of skills becomes more and more vital to economic growth and development.

The impact of the Federation’s work, even within the past year alone, with UNESCO was highlighted including but not limited to: The Human Rights Sensitization Project; Production of a local history text book; launch of the St. Kitts-Nevis National Federation for UNESCO Clubs Associations; the appointment of Victoria Borg O’flaherty as a member of UNESCO’s International Memory of the World Committee; establishment of the St. Kitts-Nevis Man and The Biosphere National Committee; the organization of two anti-doping in Sports seminars; as well as the advancement of the St. Kitts and Nevis Cultural Policy.

Also of note we a UNESCO expert mission based on a Technical and Vocational Education and Training (TVET) Policy Review at the request of Hon. Minister Nigel Carty as well as a UNESCO sub-regional meeting in Nevis on supporting environmental policy formulation and planning. A sub-regional meeting on “underwater Cultural Heritage Protection Laws for Caribbean SIDS was also held.