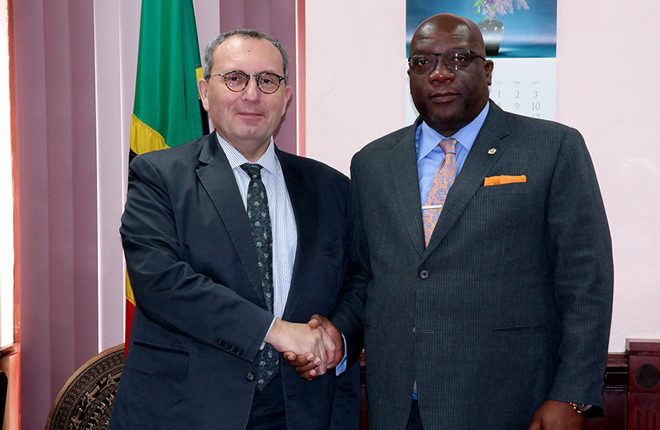 (Press Unit in the Office of the Prime Minister) – St. Kitts and Nevis’ Prime Minister, Dr. the Honourable Timothy Harris, has outlined various concerns the Federation has with respect to the recent listing of the twin island Federation as a non-cooperative tax jurisdiction by the European Union.

During the frank discussions, which were also attended by Financial Secretary in the Government of St. Kitts and Nevis, Mrs. Hilary Hazel and Cabinet Secretary, Mrs. Josephine Huggins, Dr. Harris said that his Government strongly rejects St. Kitts and Nevis’ inclusion to the list of non-cooperative tax jurisdictions, noting that “the process in our view is somewhat a bit unfair; unfair to small states like St. Kitts and Nevis in that we hardly had enough time to deal with these issues; and the kind of guidelines, which the EU provides is highly inadequate.”

Prime Minister Harris stressed that the matter of blacklisting countries is one that should not be taken lightly. He added, “Every country in our view should be given real opportunities and reasonable timeframe within which to respond to these requirements.”

Financial Secretary, Mrs. Hilary Hazel, further noted that the language as it relates to the requirements outlined by the EU is often difficult to interpret and understand, and as a result creates a stumbling block.

The financial secretary also agreed with the summation by Prime Minister Harris that these decisions to list countries like St. Kitts and Nevis, which remain committed to international standards on transparency and exchange of information for tax purposes, pose significant challenges for the country’s economy.

“You mentioned that we had a fairly good showing relative to the OECS group in terms of the prospects for growth – financial services is one of those pillars that make this possible. And so to remove that pillar or to disrupt it in a significant way leaves us in a state where we would really have to do some serious reconfiguration of the economic structure of the country,” Mrs. Hazel stated.

Mr. Manservisi acknowledged the concerns expressed by Prime Minister Harris and the financial secretary and called for continued dialogue between small island states like St. Kitts and Nevis, the European Union and its partners.

In the case of St Kitts and Nevis, the only area of concern from the EU is in respect of fair taxation. It stated that “a jurisdiction should have no preferential tax measures that could be regarded as harmful and a jurisdiction should not facilitate offshore structures or arrangements aimed at attracting profits which do not reflect real economic activity in the jurisdiction.”

Financial Secretary Hazel stated, in a national address on March 13, that St. Kitts and Nevis is a committed and fully cooperative jurisdiction in the context of international tax transparency.

This, she said, is evident by the “Largely Compliant rating by the Organization for Economic Co-operation and Development (OECD). Further, Saint Kitts and Nevis has continued to expand its exchange of information network and is a signatory to the Multilateral Convention on Mutual Administrative Assistance for Tax Matters.”