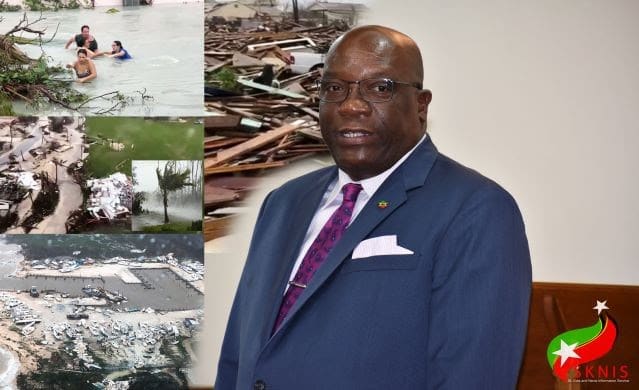 BASSETERRE, St. Kitts, September 17, 2019 (Press Unit in the Office of the Prime Minister) – Prime Minister Dr. the Honourable Timothy Harris announced during this morning’s (Tuesday, September 17) sitting of the National Assembly that the Government of St. Kitts and Nevis has approved financial aid to the Commonwealth of Bahamas to assist in the ongoing recovery and relief efforts following the devastation left in the aftermath of Hurricane Dorian.

“As part of an OECS Authority response to the devastation of the islands of Abaco and Grand Bahama, and in keeping with the preference of the government of the Commonwealth of Bahamas for financial assistance, the Cabinet yesterday afternoon (16th September 2019), met and approved a donation of US$100,000 to the Commonwealth of Bahamas as a first tranche of support to assist them with their recovery efforts,” the honourable prime minister said, while making a presentation under the section “Statements by Ministers” on the Order Paper for the Sitting of the National Assembly.

Additionally, Prime Minister Harris indicated that the Royal St. Christopher and Nevis Police Force will dispatch a number of its officers to the Bahamas.

This came following a request from the Executive Director of the Regional Security System (RSS), Captain Errington Shurland, for St. Kitts and Nevis to provide security assistance to the Royal Bahamas Police Force.

Dr. Harris said, “I am advised that the members of the police force in the Bahamas in the aftermath of Hurricane Dorian are very much tired and stressed and perhaps stretched too in the circumstances with which we could well relate to. Yesterday afternoon (September 16), the Cabinet approved the participation…of St. Kitts and Nevis under the banner of the RSS. Our officers are expected to depart around the 20th September 2019 via Barbados from whence they will be transported by the Canadian Military Air Plane to the Commonwealth of Bahamas for duty.”

The prime minister stated that the security chiefs of the RSS, including the Acting Commissioner of Police Mr. Hilroy Brandy, met on September 12, 2019, in Antigua and determined that an initial contingent of 32 police officers will be deployed by the RSS to the Commonwealth of Bahamas.