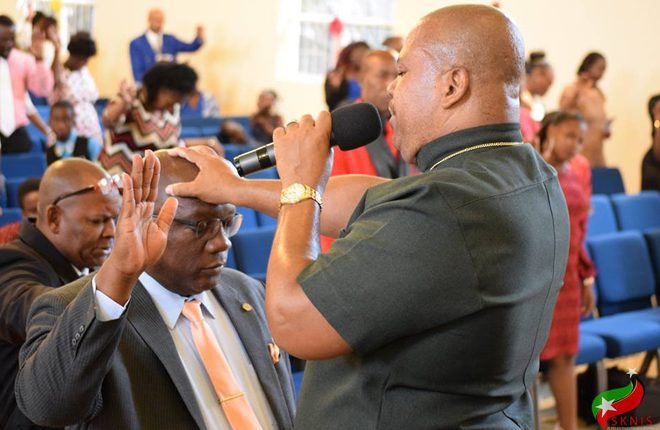 St. Kitts and Nevis has much to gain as a nation under God, says Prime Minister Harris

(Press Unit in the Office of the Prime Minister) – The twin-island Federation of St. Kitts and Nevis has much to gain as a nation by holding onto the word of God. That view was expressed by Prime Minister Dr. the Honourable Timothy Harris when he addressed the regular and visiting congregation of the Calvary Baptist Church in Sandy Point on Sunday, 5th November, 2017.

St. Kitts and Nevis’ Prime Minister regularly worships at the various churches of different denominations across the Federation.

Prime Minister Harris told the gathering, “We hope that by our own example as a Government – showing a commitment to the work of God and the love of God – we certainly can encourage others into that path.”

The Honourable Prime Minister continued, “In our Constitution, we say that we are a nation under God. We allow our churches the freedom to worship and to engage and we certainly know what a good thing it is to have an active church in the community.”

Following his highly spirited and motivational sermon, Bishop Collins anointed Prime Minister Harris in front of the entire congregation and prayed for God’s grace and divine will to guide the Prime Minister as he carries out his duties and responsibilities as leader of the twin-island Federation.

Recognizing the importance of God and the church to nation-building, the Team Unity administration created a Ministry of Ecclesiastical Affairs, which is headed by Senior Minister and Premier of Nevis, the Honourable Vance Amory. Bishop Ron Collins is the Ministry’s acting Permanent Secretary.

Through that ministry, the Dr. the Honourable Timothy Harris-led Government has sought to ensure the faith-based community has a voice in all facets of national development, particularly as it relates to addressing the issue of crime and violence.

Prime Minister Harris and his Cabinet has met with church leaders several times, including in August of this year.