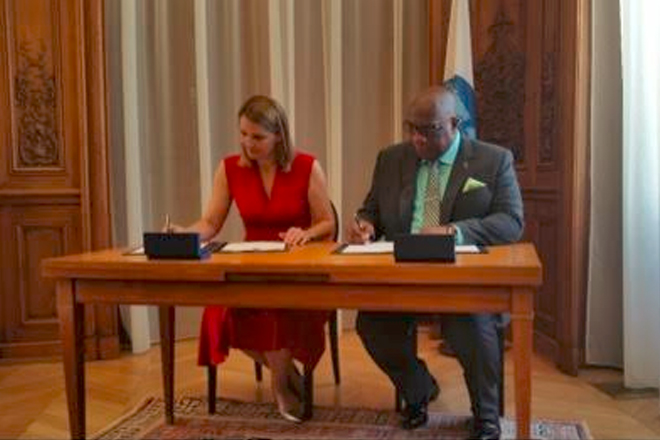 St. Kitts and Nevis has signed the Multilateral Convention on Mutual Administrative Assistance in Tax Matters

(PRESS SEC) – The Federation of St. Kitts and Nevis has signed the Multilateral Convention on Mutual Administrative Assistance in Tax Matters.

Upon the invitation of the Organisation for Economic Co-operation and Development (OECD), Prime Minister Dr. the Honourable Timothy Harris yesterday, Thursday, August 25th, 2016, attended a signing ceremony at the OECD headquarters in Paris, France, where he signed the Convention. Burkina Faso, Malaysia, Samoa, and St. Vincent and the Grenadines also signed the Convention yesterday.

Prime Minister Harris deposited the Instrument of Ratification with the OECD after the signing ceremony, thereby formalizing the commitment of the St. Kitts and Nevis government to the Multilateral Convention on Mutual Administrative Assistance in Tax Matters. Andorra and Senegal also deposited their instruments of ratification yesterday. As a result, the Convention will enter into force in Andorra, Senegal, and St. Kitts and Nevis on Thursday, December 1st, 2016.

According to the website of the Organisation for Economic Co-operation and Development (OECD), “The Convention is a freestanding multilateral agreement designed to promote international co-operation for a better operation of national tax laws, while respecting the fundamental rights of taxpayers. The Convention provides for all possible forms of administrative co-operation between the parties in the assessment and collection of taxes, in particular with a view to combating tax avoidance and evasion.”

The Convention provides a framework for the implementation of the global standard for automatic exchange of financial account information, which consists of two components a) the Common Reporting Standard (CRS) that outlines reporting and due diligence rules and procedures and b) the Model Competent Authority Agreement that outlines detailed rules for the exchange of information. Under the standard, jurisdictions are obligated to automatically exchange financial information from their financial institutions with other jurisdictions on an annual basis.

“At the heart of the Convention is the matter of confidentiality and data safeguards where each country is ever mindful of the need to ensure that all tax information remains confidential,” Mrs. Sylvia Gumbs, Deputy Financial Secretary in the Government of St. Kitts and Nevis, said yesterday.

“Our laws and procedures that pertain to confidentiality have been assessed, and we have satisfied those responsible for undertaking the assessment that taxpayers’ information will be safeguarded and will remain confidential,” the Deputy Financial Secretary added.

Mrs. Gumbs noted that, “Signing the Convention will bode well for the Federation of St. Kitts and Nevis, as it demonstrates to the international community our commitment to implementing the international standards on transparency and exchange of information for tax purposes. This will also further cement the country’s reputation for being a cooperative jurisdiction with respect to tax transparency, as we would have met all three criteria that assess a jurisdiction’s level of cooperativeness, namely (i) it being in receipt of a ‘Largely Compliant’ rating with respect to the Exchange of Information on Request Standard, (ii) its commitment to automatically exchange CRS information by 2018 at the latest, and (iii) its participation in the Convention. In an era where the Financial Services Sector is constantly being challenged with the introduction of new standards and regulations, to a point where some Correspondent Banking Relationships are at risk of being terminated, it is critically important that the Federation of St. Kitts and Nevis takes the necessary steps to protect our Financial Services Sector and ensure that our people and businesses are not prevented from conducting legitimate business worldwide.”

The Organisation for Economic Co-operation and Development (OECD) and the Council of Europe jointly developed the Convention in 1988, and it was amended by a Protocol that entered into force on June 1st, 2011. As of yesterday, Thursday, August 25th, 2016, there are 103 jurisdictions participating in the Convention on Mutual Administrative Assistance in Tax Matters.