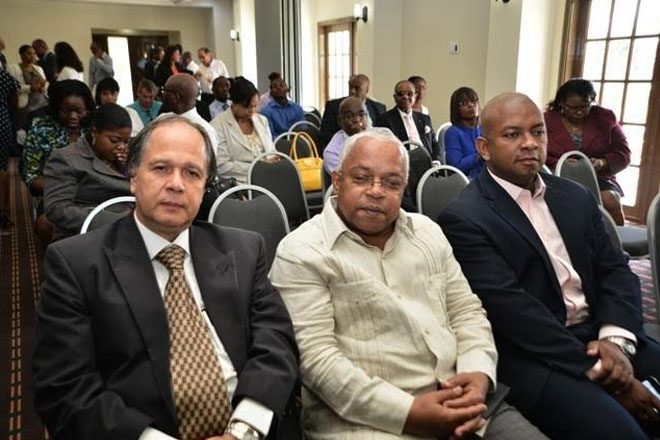 Basseterre, St. Kitts (SKNIS) — A gathering of regional and international players met today in St Kitts and Nevis to discuss the foundation of a regional Citizenship-by-Investment authority, organised by IPSA International, a consultancy.

St Kitts and Nevis Prime Minister Dr. the Honourable Timothy Harris said that the meeting was a major step towards greater regional co-operation in Citizenship-by-Investment programmes.

“I am grateful to other jurisdictions for their willingness to join us in St Kitts and Nevis in exploring opportunities to build a more robust architecture based on our joint commitments to greater transparency, enhanced credibility and efficiency in our Citizenship and Investment Programme,” said Prime Minister Harris.

Government officials, industry leaders, service providers, regulators and other stakeholders are meeting under the theme “Transparency, Credibility and Efficiency”.

Gaston Browne, the prime minister of Antigua and Barbuda, hailed it as an “historic and important conference”. “It is important that we protect our projects, that our programmes remain competitive but also sustainable. We need to create a globally competitive Caribbean brand.”

Emmanuel Nanthan, Citizenship by Investment Unit ambassador of Dominica, said that greater regional co-operation was imperative. “We are one Caribbean community,” he said. “What affects one of us affects us all. St Kitts has the Park Hyatt being built by Range Developments, while in Dominica the same developer is about to start construction of the Cabrits Resort Kempinski. We all look forward to working together more closely.”

During the two days of meetings, attendees will hear presentations from various sectors of the industry, and will also participate in seminars designed to strengthen processes to ensure the continued viability of the regional programs.

Nicholle Manz-Baazaoui, Political and economic counselor at the Embassy of the United States in Barbados, said that the US Government welcomed the initiative. “We understand how important these programmes are to the Caribbean,” she said. “But is also important that these programmes are run responsibly and that our national security is not compromised. This seminar is a good step in that direction.”

Victoria Dean, the British High Commissioner to Barbados and the Eastern Caribbean, agreed that more dialogue was good, along with more transparency and due diligence. “Help me to help you,” she said. “Regional governments need to be able to show that they are serious about these programmes. The British are happy to help in any way we can, but we are not in the business of doing your due diligence.”

The Citizenship by Investment Programme of St. Kitts and Nevis is recognized as one of the longest and most successful in the world. Prime Minister Harris highlighted its benefits.

“It has played a meaningful transformative role in the development of the economy of our twin-island Federation,” he said. “An IMF report indicates that fees from CBI account for an increasingly large amount of budgetary revenue, from about 1 per cent of total revenue in 2007 to 22 per cent in 2012 and an estimated 37 per cent in 2013. Revenues were further increased by investment proceeds from the SIDF of 1.1 per cent of GDP during 2010-2012. Without this option, the St. Kitts Nevis socio-economic experience would have been dramatically different. So I don’t have to convince you that I remain a supporter of this Programme.”

Prime Minister Harris also underscored that, programs such as these properly set up and appropriately administered and policed, can be an important national asset and vehicle for much needed foreign direct investment. It can also become a potent driver of employment and can contribute to the sustainable growth of the national economy. He continued, they could provide the resources for sustaining debt reduction efforts, modernizing our public infrastructure, supporting indigenous and local entrepreneurship and create a pool of resources for the inevitable rainy days.

“In St Kitts & Nevis, the CBI Programme represents roughly 30 plus per cent of our annual revenue. Essentially, it is a pillar in the foundation of this country’s future prosperity. However, these programmes rise and fall on one simple ideal: trust,” he said.

Attendees from Antigua and Barbuda, Dominica, and Grenada, the regional CBI providers were present.